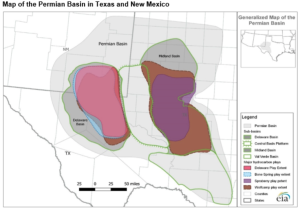 The Permian Basin, which spans western Texas and eastern New Mexico, represents the most prolific hydrocarbon production region in the United States. 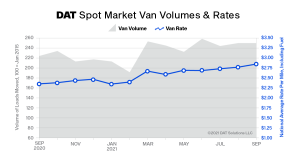 Spot and contract truckload rates hit new highs in September as shippers grappled with historic surges of freight, constraints on equipment and drivers and an early start to the peak holiday shipping season. 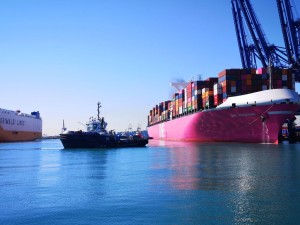 Full unloading containers -import- increased by 42.29% and full loading containers -export- by 17.22% Full container traffic dedicated to unloading -import- has grown by 42.29% in the month of September and cargo -export- has grown by 17.22% according to data from the Valencia Port Authority (PAV) Statistical Bulletin. This trend is also reflected in the year-on-year data for the period October 2020-September 2021, when 1,084,356 export containers have been registered, 17.85% more than in October 2019-September 2020. During this time, import TEUs - or 6.1-metre container equivalent units - amounted to 810,735, 16.18% more than in October 2019-September 2020. This volume of loading and unloading represents 40% of the total number of import/export containers that entered or left the Spanish port system up to September and confirms Valenciaport as a strategic ally of the business fabric of its area of influence. An upward dynamic that shows the importance of Valenciaport's services and connectivity, which is also reflected in the accumulated figures for the year. Specifically, between January and September, a total of 813,114 TEUs (standard 20-foot containers) full of cargo or export have been moved through the docks of Valenciaport, which is 19.92% more than in the same period of 2020, while those for unloading or import have reached 618,719, 18.63% more. With regard to transit and empty containers, the figures are similar to the period January-September 2020. Thus, total traffic in the first nine months of the year (including liquid bulk, solid bulk, non-containerised goods and containerised goods) has exceeded 63.46 million tonnes, which represents an increase of 8.33% compared to 2020, and the total number of containers has been 4,217,112, 6.65% more than the accumulated figure for the previous year. In addition, between January and September 2021, ro-ro traffic (a system by which a vessel transports cargo on wheels) reached 9.6 million tonnes, representing an increase of 15.82%. During this period, rail traffic amounted to 2.25 million tonnes, an increase of 18.38%. It should also be noted that in the first nine months of the year, 368,900 cars were handled at the Valenciaport docks, 1.1% more than in 2020. About passenger traffic, between January and September a total of 438,895 people travelled through the Valenciaport docks, 27.11% more than in 2020. Of these, 382,261 have done so on regular lines (+19.83%) while 56,634 cruise passengers have visited Valencia, more than double that of the previous year after the recovery of this activity in the second half of this year. Data by merchandise January-September 2021 In these first nine months of the year, containerised general cargo has grown by 5.74% to over 48.18 million tonnes. In this heading, exports of construction materials (+28.28%), vehicles and transport elements (+22.01%), agri-foodstuffs (+20.67%), chemical products (+18.88%) and iron and steel (+12.27%) sectors stand out. Non-containerised general cargo closed the month with an accumulated traffic of 10.95 million tonnes, 16.91% more than in the same period of the previous year. Liquid bulks closed with 2.34 million tonnes, representing an increase of 15.56% and solid bulks mobilised 1,662,304 tonnes, 19.87% more than in 2020. Traffic by geographical area In full container traffic, China continues to be Valenciaport's main trading partner with 461,201 TEUs in the first nine months of the year and an increase of 20.63%, followed by the United States with 404,321 containers and an increase of 5.04%, and Turkey with 236,153 TEUs, up 4.35%. The most dynamic countries in terms of growth were Morocco with a 39.19% increase, Italy with 38.62% and Pakistan with 27.13%. Regarding freight traffic by geographical areas, the Mediterranean and the Black Sea have moved more than 18 million tonnes, representing an increase of 10.39%, followed by Spain with 7.58 tonnes and 8.57% more and the Far East with an increase of 8.24% and 7.32 tonnes of goods handled from the docks of Valenciaport.

EIA: Annual U.S. coal-fired electricity generation will increase for the first time since 2014 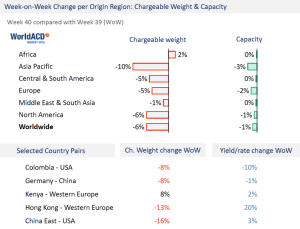 WorldACD's latest views on air cargo market developments, covering each of the last 5 weeks up till Sunday 10 October.

Rail Traffic for September and the Week Ending October 2, 2021 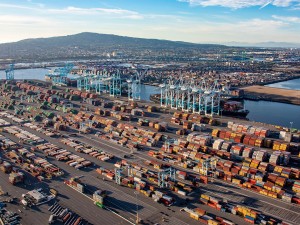 Transpacific rates at a two-month low, as congestion grows on East Coast

With production in China slowed during Golden Week and by power restrictions, and with delays making it increasingly unlikely that shipments not already moving will make it in time for the holidays, transpacific ocean rates stayed level this week at their lowest point since mid-August. 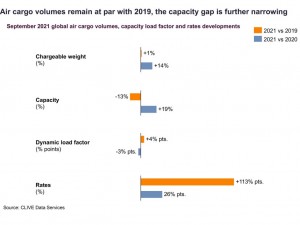 In June of this year, China implemented a new consumption tax policy that affects imports of two fuels: mixed aromatics, which were blended into gasoline, and light cycle oil, which was blended into diesel. 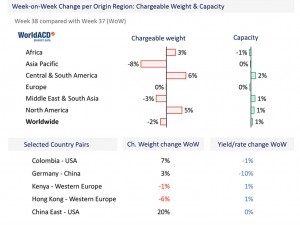 WorldACD's latest views on air cargo market developments, covering each of the last 5 weeks up till Sunday 26 September. In week 38, worldwide volume decreased by -2% compared with the previous week. Worldwide capacity increased by +1% week-over-week. On a regional level, volumes from Central & South America did best with a volume increase of +6% week-over-week, while Asia Pacific experienced the largest decrease (-8%). The average worldwide yield/rate in week 38 was at the same level as in week 37.

Oil dips ahead of OPEC+ key meeting, while market surprised by US stock builds - Rystad Energy

Oil prices are poised to close the week in a bearish track as traders were surprised by a build of crude stocks in the US and are pricing in reports that OPEC+ may consider an option to hike output more than planned in its coming meeting.

China’s announcement to stop building coal-fired plants abroad could have been expected as China introduced their national carbon neutrality targets last year so it is logical to align their international strategy accordingly.

The bullish September spin looks poised to continue to nurture higher oil prices above $75 in the very near term, supported by the forecasted super-size gasoline draw by API, as well as general supply tightness that is likely to persist in the short term.