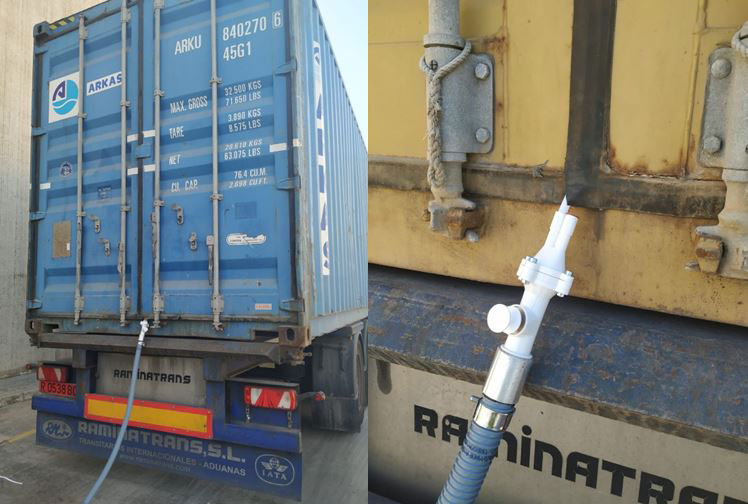 The global movement of goods is essential in the globalized world we live in. The maritime trade has continued to grow over the last decades, notwithstanding a financial crisis in the beginning of the present century. The growth of container transport is even more impressive (see chart). Just to have a number in mind, in 2018, around 750 million containers were shipped over the world. Although the COVID-19 pandemic has had a negative impact, the current recovery in transport is better than expected giving rise to the expectation that also this crisis will not affect trade on the long run. However, this article is on containers, more specific on the inspection of containers and the challenges that increasing trade brings along for that important task in our need for global security.

To prevent the massive flows of containers around the globe to be misused, it is essential that effective control measures are put in place. Examples of occurring risks associated to container transport are the unregulated transportation of illicit/ dangerous substances. Within this group of substances, the CBRNE (Chemical, Biological, Radiological, Nuclear and Explosive) materials stand out for the serious damage that may be caused to our societies, the environment and as consequence to the economy when in the hands of ill-willing.

The US Secure Freight Initiative to comply with Section 232 of the Safe Ports Act of 2006 mandates that 100% of cargo containers shipped from overseas to US ports should be scanned using noninvasive technology and radiation detection equipment by July 2012. The implementation has been postponed regularly. Customs and Border Protection (CBP) currently scans 3.7% of the roughly 11 million containers entering the US each year. Only about 1% of that total, or 104,000 containers, are checked at ports overseas. Similar figures can be found for the EU. Around 1.5% of all cargo arriving to EU ports is scanned. The European COSMIC project (https://www.cosmic-cbrne.eu/) has prepared the ground for a change.

The only alternative to increase the inspection ratio while preserving the logistics, is the development of new technology and the investment in those innovative solutions. Both, the US and the EU, are aware of this. They have launched research and development projects into new technologies for container inspection and efficient implementation of inspection in port activities. This latest example is that of the European COSMIC project that aims at the development of an integral, 3-stage, non-intrusive inspection solution.

At the first stage all the containers selected will be inspected by the first layer of COSMIC technologies in combination with existing X-ray systems, allowing for a fast and more complete analysis of the container, including that of the air inside. In case a suspicion of an irregularity arises, the container will pass to the next level of screening where the second stage COSMIC technologies are applied to disprove or to gain more certainty on the presence of a threat. Technologies in this second stage are more precise and a bit slower than those at the first stage but maintain the pace of the logistics to a large extent.

The first and second stage are carried out without a need to open the container, which is a clear advantage. In case the suspicion is not relieved, the container will be pass to the third inspection stage, where the container checked using COSMIC third stage technology. This manual third stage inspection includes specific virus and biological material analysis equipment and requires the opening of the container.

The project is led by LINGACOM Ltd, an Israeli company that has developed a Radiological and Nuclear material sensor based on naturally occurring muons, interacting with the container contents. A highly sensitive vapor detection solution has been developed by a Spanish partner. A remarkable sensitivity for Chemical, Biological and Explosive threat material down to 0.01 ppq (parts per quadrillion) was achieved by this experienced entity. This level of sensitivity is required to accurately detect minute traces in the air from a 40-feet container, under almost every condition. The Spanish entity, in collaboration with Yale University, with the participation of the Spanish National Centre for Biotechnology (CNB-CSIC) has developed a virus (SARS-CoV-2 included) detector making use of high-resolution electrical mobility.

In parallel, the Israel Institute of Technology (TECHNION) has developed a microsensor for the identification of chemical and biological agents employing the change in resistance between the absence and presence of threat material on nanogold chips. The University of Ben Gurion (Israel) has completed the development of a low-cost unit capable to react when exposed to small amounts of bacteria. Lost but not least, ATOS has integrated all these technologies in a common COSMIC data fusion engine for the complete automatic operation of this system of systems.

The capabilities of the innovative COSMIC set-up allow the swift inspection of containers for CBRNE threat material, without the need for opening them at the first and second stage. In a few minutes, with reduced false alarm ratios and detection rates higher than the state-of-the-art technologies, depending on the type of threat the container is screened. This performance matches the needs of industry as well as those of administrations perfectly since it allows for efficient and effective inspection of also at higher percentages of inspections.

The COSMIC project will be finalized soon. You are cordially invited to join its final event on Sept, 30th, 2021, in the morning (GMT+1 time zone). For pre-registration, please fill-out the following form. The definitive invitation, agenda and the connection details will be sent a few days prior to the event.