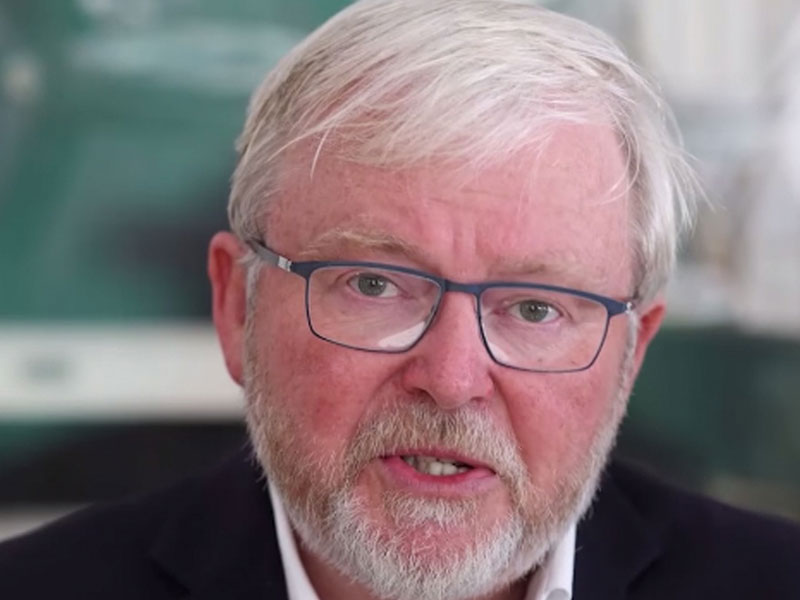 China’s rise in the international arena has been meteoric: from a former obscure communist state that was once caught in the web of internal dissent and deep political turmoil, China has risen to become a global political, economic and military heavyweight whose actions and defiance of what is called “rule-based order” cause trepidations among much of the world.

Former Australian Prime Minister Kevin Rudd, scholar, diplomat, politician and an acknowledged China expert, who speaks fluent Mandarin, has been airing his views about China and its role in international affairs, trade and economics. Rudd, currently the President of the Asia Society Policy Institute, recently delivered the Elizabeth French Hitchcock lecture at the Foreign Policy Association on the subject of “Power in the Indo-Pacific: China faces the Quad alliance – Australia, India, Japan and the U.S.”. At the end of the lecture, one came away with the feeling that he was warning the West not to let down its guard against China’s growing assertiveness.

Rudd Remarks – Break With the Past?

Rudd’s FPA remarks contrasted with his past comments when he seemed reticent to publicly criticize China for its poor human rights record (Tibet, Xinjiang and, lately, Hong Kong, not to mention its constant threats against Taiwan) or its belligerence in the South China Sea.

Rudd has dismissed suggestions that he exercised restraint in the past, pointing out that he had expressed concerns to the Chinese government on human rights, etc.

“I’ve had many disagreements with China on human rights in the past,” he recently told the BBC, reminding that during his first China visit as prime minister, he had delivered an address at Peking University in Chinese criticizing China’s human rights performance but that he was diplomatic in his official dealings with China.

China seemed to have been taken aback – judging from the editorials in its state-controlled media – by Rudd’s BBC interview in which he urged countries to unite against China’s growing economic and geopolitical coercion or “risk being singled out and punished by Beijing”.

Rudd’s BBC interview was interpreted by the Global Times as an indication, firstly, that Australia was feeling “increasingly uncomfortable about China’s counterattack against its provocation” and, secondly, that the West’s US-led anti-China campaign created such a big influence that a “political correctness” has emerged to the ideology of the West. “Rudd is catering to these two sentiments and trends to create a political balance between himself and the Australian Labor Party.”

Rudd’s comments come at a time when Australia and China are locked in a trade war and bilateral relations have hit an all-time low point. He said that the governments in the West should not be afraid to challenge China on issues such as human rights.

“If you are going to have a disagreement with Beijing, as many governments around the world are now doing, it’s far better to arrive at that position conjointly with other countries rather than unilaterally, because it makes it easier for China to exert bilateral leverage against you,” Rudd said.

Beijing last year launched a series of punitive measures against Australia particularly after Prime Minister Scott Morrison called for an independent inquiry into the origins of the Covid-19 pandemic. The measures include bans and tariffs on Australian exports, including coal, grain and seafood.

This comes after Trade Minister Dan Tehan recently said the government was still contemplating the referral of Chinese wine export tariffs to the World Trade Organization (WTO), having already complained about barley tariffs.

After Australia used the foreign veto legislation to rescind the Belt and Road Initiative infrastructure agreement with China, Beijing imposed sanctions against Australian exports of an array of agricultural and food products, including wine, beef, lobster and barley, hinting that more might come.

Beijing has also suspended economic talks with Canberra, which effectively means there is no high-level contact to smooth things out.

Rudd’s recent comments on China at the FPA and in the BBC interview have been followed not only in U.S. political and trade circles but have also reverberated in several countries that are ideologically allied with the U.S. The European Union has suspended its negotiations on a free trade agreement with China following the anti-China sentiments in several European countries over human rights abuses in Xinjiang, Hong Kong, and the threats to Taiwan. Some major European business houses had already decided to stop importing Chinese cotton which is sourced, largely, from Xinjiang.

Initially hit by Chinese sanctions on barley, wine, lobsters, coal and other products, Australia has, meanwhile, offset these sanctions by diversifying its markets. China, on the other hand, is heavily reliant on Australian raw materials, particularly iron ore for its steel industry. The huge demand has sent iron-ore prices soaring and Chinese importers are paying much higher iron ore prices.

Realizing its own vulnerability, China is also looking at increasing the use of scrap material for its steel industry. It has set an ambitious goal of doubling steel production from its electric arc furnaces within the next half decade, generating a voracious appetite for iron ore, at least, in the medium term.