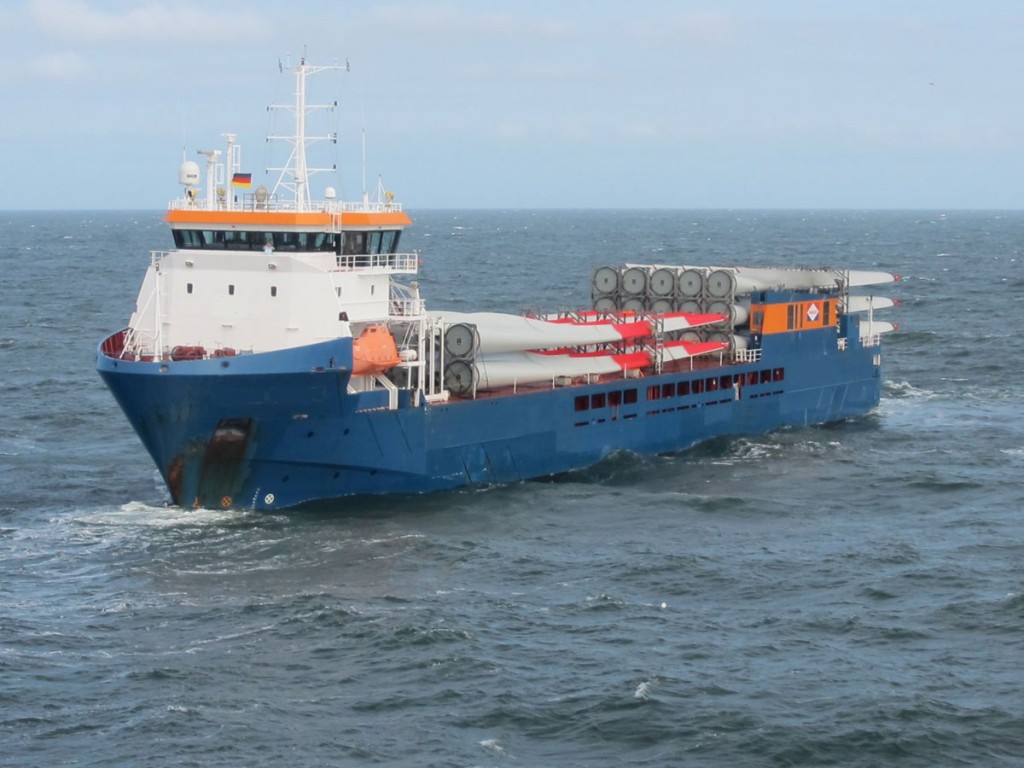 U.S.-based Green Shipping Line (GSL) is proposing to build the first of what it hopes will be a fleet of feeder ships to transport wind turbine components from U.S. Atlantic coast ports to new Atlantic coast wind farms, according to Percy Pyne, Chairman and CEO.

In an interview with AJOT, Pyne said that GSL’s plan is to deploy a feeder vessel, that is Jones Act compliant, so as to transport components to wind turbine installation vessels (WTIV).

GSL has named the first proposed feeder the “Eleanor.” It will be designed to transport offshore wind components, including towers, nacelles and blades, from a port to installation sites in a two-day cycle, cutting down on costs and production time by over 40 percent. The 364-ft vessels will be the first in the U.S. capable of transporting all components of a wind tower.

Pyne conceded that “we do not yet have a contract” with an offshore wind developer, but is confident that the potential savings of the feeder ship will attract developers.

Pyne said the European model for installing wind turbines works well in Europe where there is a large assembly port that concentrates the deployment of components from a large staging area. In the United States, wind farms are just now being built. U.S. ports lack the capacity to massively support installations, but can easily adapt to loading blades and towers onto the feeder ships.

The result, Pyne says, is that the upfront infrastructure cost and deployment of components will be cheaper utilizing the feeder vessels out of Atlantic coast ports. The strategy is to gradually build up a support fleet of vessels to work with the WTIVs.

Dominion Energy recently announced that it has contracted with the Keppel Shipyard in Brownsville, Texas to build the first Jones Act jack-up WTIV to install wind turbines at its wind farm off the coast of Virginia.

GSL has also has announced an agreement with the Dutch naval architect and engineering firm DEKC Maritime to provide the design and engineering drawings for the feeder ship based on an existing design.

DEKC Maritime originated in 1972 as the detail engineering department of Centraalstaal. Centraalstall performed precision steel plate cutting that delivered steel sections in sequence to support ship construction at small shipyards in the Netherlands. Centraalstaal provided shipyards with complete building kits. Based in the northern city of Groningen, the engineering firm became Vuyk Engineering and along with Centraalstaal became part of the Central Industry Group (CIG). CIG went bankrupt in 2016. Centraalstaal filed for bankruptcy on June 7th. The loss of Dutch shipbuilding work to Eastern Europe and Asia has been a long-term problem.

DEKC survives as an engineering firm and ship designer.

Pyne said that Centralstaal will emerge from bankruptcy and hopes to transfer the Centraalstaal model to Michigan to support Moran Iron Works in future mass-production of feeder ships utilizing Dutch designs provided by DEKC.