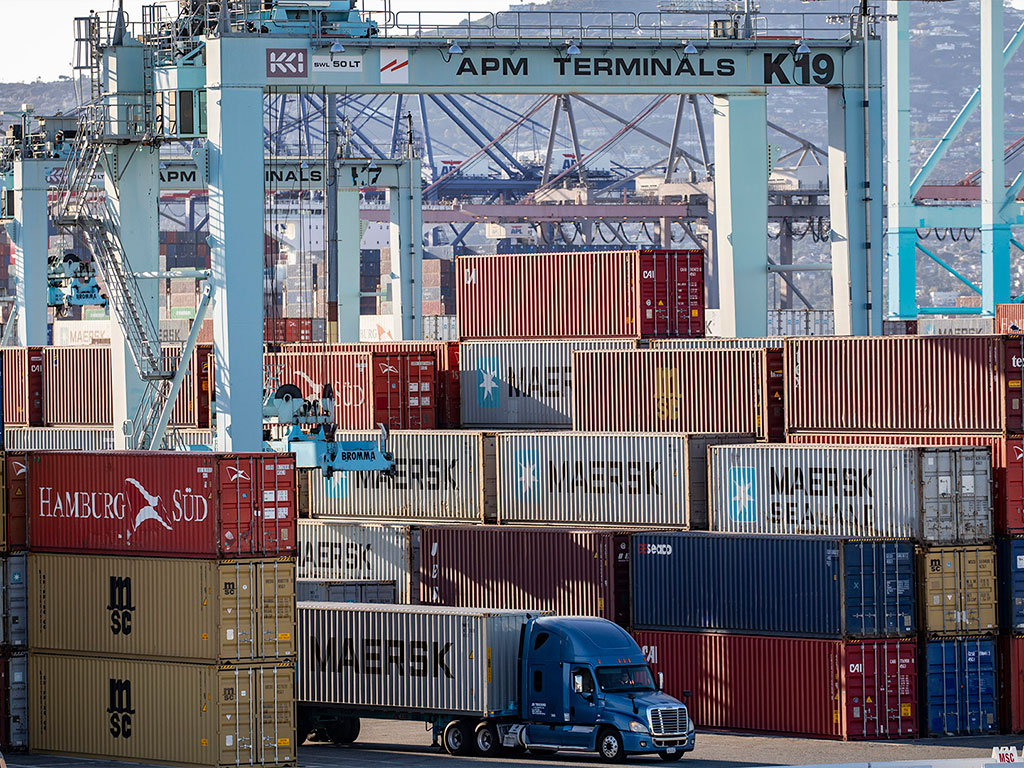 A ‘peel pile’, ‘peel-off’ or ‘flow stack’ is a concept first introduced in 2015 that is getting more usage at the Ports of Los Angeles and Long Beach as a result of the increase in 2021 import cargo congestion, according to Mason George, president of IMC Companies, National Accounts.

IMC, based in Memphis, Tennessee, says it is the largest harbor trucking company in the United States with seven operating companies across the country, more than 20,000 containers and chassis stored at company depots and access to 62,161 drivers.

In an interview with AJOT, George said that IMC has seen a major improvement in truck turn times at the Ports of Los Angeles and Long Beach since it began accelerating the use of the ‘peel off’ systems in 2021.

Under the system, drivers pull up to the indicated “pile” and simply take the next container that is “peeled” from the pile. This keeps drivers moving and productive, even if they don’t know the exact load they’re getting or the delivery location.

An effective peel pile process can cut a driver’s wait time by more than half.

IMC Companies is currently working on peel off projects at the Ports of Los Angeles and Long Beach as well as at Chicago rail facilities run by the Burlington Northern Santa Fe (BNSF) railroad.

George told AJOT that the system needs more customers to have a greater impact on port congestion at the two Southern California ports and also requires collaboration between shippers.

Originally designed for big shippers with high volumes of container imports, IMC has added smaller shippers with smaller volumes to the system:

“We need more customers and more vendors who want to get on this thing…this is something that can solve the problem ... a year ago we might have done a peel pile once or twice a week …now we’re doing it on a daily basis at terminals including APM (AP Moeller Terminal, Port of Los Angeles) and TTI (Total Terminals International, Port of Long Beach), two terminals where we can deliver our empties and pick up full loads from ocean carriers (such as) Maersk and Mediterranean Shipping Company.”

Truck drivers who have faced hours in line waiting to pick up an import container using the existing systems at container terminals are seeing the number of truck trips they can now make to the two Ports of Los Angeles and Long Beach double:

“Last year we were getting two turns per driver at any given terminal. With the customers in our yard, we have seen 4-5 truck turns per day. It’s just startlingly different. If this was applied to a whole terminal and not just to our customers, I think the terminal could be 3-4 times more efficient than what you’re doing right now … We assume participants need the boxes now and that when we pick up a loaded container, it’s going straight to the warehouse.”

The system is based on distribution centers and warehouses not delaying: “We will pull boxes for a customer and hold them a maximum of 2 days but if they don’t pick them up then” they are stored at a remote location.

At Chicago rail facilities run by the Burlington Northern Santa Fe “two to three times a day (truck turn times) was what our guys were getting before the peel pile” after peel pile was instituted “we had one driver who did 13 turns in one day. So, it’s unbelievable in how this process can make a dent in what we’re doing.”

George pointed out that “Containers are made to stack on top of each other, however, doing so at the “current rate (due to congestion) … has resulted in an inability to easily get to the desired container and, therefore, delays.”

“In Memphis and Chicago, they’re stacking containers 4-5 high and, in Los Angeles, they’re going as high as 8 containers in a stack. Even if there were 200% more chassis on site, there’s not enough room to store all the wheeled equipment, so rails and ports have gone “vertical” for storage. This creates challenges as most containers are not on top, so crane operators have to dig them out, causing unproductive moves and dwell times to skyrocket. This can result in unnecessary labor, downtime and waiting.”

George cites other improvements for truck pickups and deliveries:

“It can take 3 times as long for a driver to get a container in a non-peel pile process. In fact, industry reports note that an effective peel pile process can cut a driver’s wait time by more than half. Overall, an effective peel pile process can cut dwell time on a container from 9 days down to 3 days, potentially mitigating demurrage expenses … What’s more - a driver can make 7 turns instead of 3 in markets like Memphis and Chicago and, in Los Angeles and Long Beach, a driver can expect to make 5 turns instead of 2.”

The result: “Decreasing wait times and maximizing productivity means happier drivers, cleaner air with reduced truck emissions, increased cargo movement and, most importantly, the start of loosening the bottleneck on the supply chain that has plagued shippers, ports, rails, laborers, service providers and consumers for the past several years.”

IMC is marketing a proprietary app to help drives navigate the traffic jams: “We have implemented solutions to relieve unproductive lifts, long driver dwell times and inaccessible cargo. One of those innovations is SmartStacks, our proprietary, data-based version of the ‘peel pile’ that exponentially increases a driver’s efficiency and our overall capacity.”

Recently the Ports of Los Angeles and Long Beach announced they would be imposing surcharges on containers that are not moved off container terminals in a timely manner.

George is skeptical the move will have much impact: “I don’t think this is effective. I am of the belief that most people want their cargo…. there’re people walking around in empty warehouses. The majority of people want their stuff. The tragedy is the system has not allowed accessibility and that’s what we can do with the SmartStack.”

However, Noel Hacegaba, deputy executive director, Port of Long Beach told AJOT the surcharge on containers is having a positive impact: “This fee is already meeting its objective. As of November 7, the number of aging containers targeted by this fee (9+ days for local delivery and 6+ days for intermodal) is down -26% in Long Beach terminals.”

On November 15, 2021, the Ports of Los Angeles and the Port of Long Beach announced that they will delay consideration of the “Container Dwell Fee” directed at ocean carriers until Nov. 22, 2021 citing significant improvements in clearing import containers.

Flexport notes complexity of peel off

One reason that peel off is not more widely used is that it requires a great deal of coordination, according to a 2020 blog posted by cloud-based freight forwarder, Flexport:

“Coordinating a peel-off requires alignment between shippers, freight forwarders, and their ocean and drayage or trucking partners. The teamwork needs to be tight, but the potential for efficiency is extraordinary. A peel-off is available to shippers that meet volume minimums—or work with freight forwarders that do. Required volume can range from 30 to 300 containers on a single vessel, depending on the port and its terminals. In some instances, the peel-off can include containers from multiple vessels. A successful peel-off begins at the port of origin, with freight forwarders ensuring containers are stowed on the vessel or vessels in groups. Think of it as the “priority baggage” sticker you see at airports …

Once at destination, longshoremen remove the containers from the ship, segregating them in stacks in a staging area, usually a yard near the terminal. Since containers are already grouped for speed, a top picker crane moves them quickly, compared to the usual transtainer, also known as an RTG, which has a more limited range. With a peel-off, freight forwarders know the day and time of recovery for every container before the vessel arrives, so trucks only go to the staging yard after the containers are organized, allowing more efficient delivery coordination or prioritization. When trucks can free-flow into the yard—forgoing the short notice of the traditional appointment system—drivers regain control of timing, bypassing congestion, unpredictable wait times, and the limitations of access during peak hours only.”