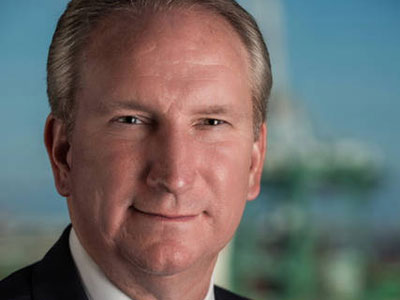 At the Port’s July 14th press briefing, Seroka was asked by AJOT about a Pacific Merchant Shipping Association (PMSA) report showing that West Coast ports have increased their import market share over East Coast and Gulf ports from 36.8% in April, 2019 to 38.9% in April, 2021.

Seroka said he expects the trend to continue:

“I do, because of all the predicted analytics that we have been sharing in today’s session …. All indications are that July and August looks super strong heading into the traditional peak season and our outlook now … shows a very strong second half of the year. The numbers are going to fall where they may. Market share is important because it means more cargo is coming in at greater levels (as well as) job creation that we can induce here at the nation’s largest port. So, all of that is important but it comes down to competitiveness. We’ve got to deliver value for the money.”

In other news, the Port announced that it processed 876,430 TEUs in June, which was its busiest June ever and closed the fiscal year at 10,879,383 TEUs, “a new milestone for any Western Hemisphere port.”

“Key economic indicators all suggest that U.S. consumer spending will remain strong through the remainder of 2021,” Seroka said. “Even as Americans return to airline travel, vacations and in-person events, retail sales and e-commerce remain robust.

However, congestion problems persisted according to May/June averages with many ships backed up at anchor waiting for berth space.

The Port reported delays in terminal and rail operations:

•Terminal dwell time was 4.8 days slightly down from 5 days in February.