Lock and dam system for Honolulu? Is this just the beginning? 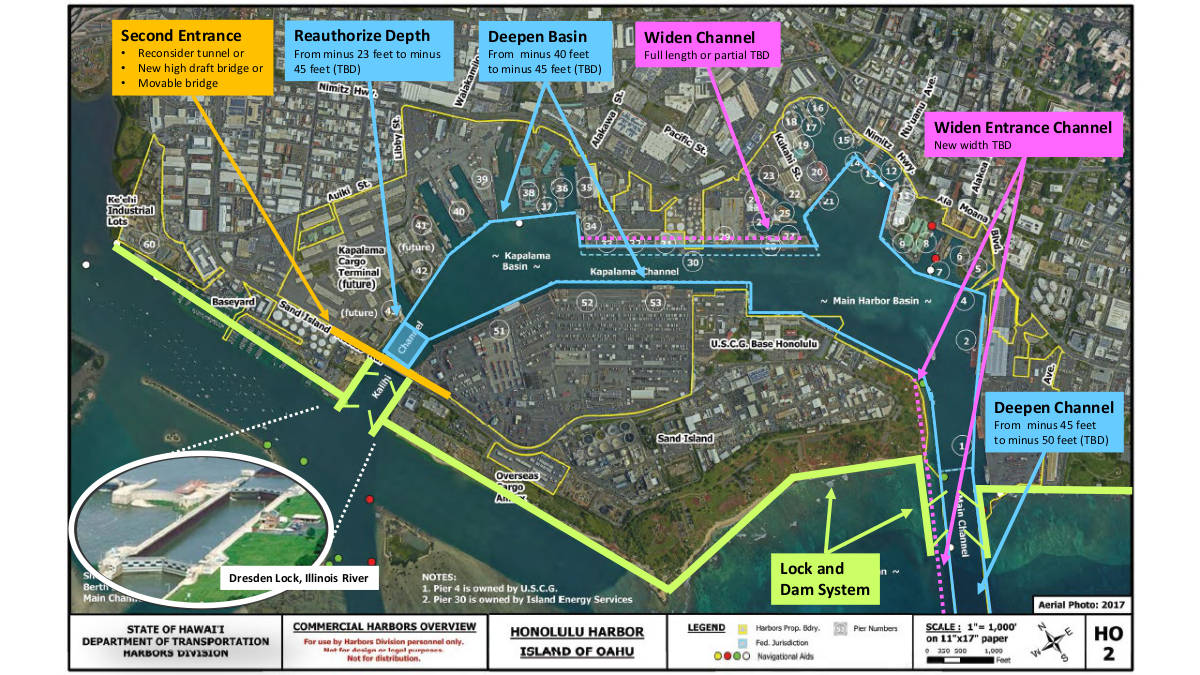 Derek Chow, deputy director, Department of Transportation, Harbors Division (DOTH) tells AJOT that the State of Hawaii has asked the U.S. Army Corps of Engineers to study the construction of a lock and dam system for the ship channel entrances to Honolulu Harbor to combat rising sea levels.

In an April 20th email to the Hawaii Harbors User Group (HHUG), an association of maritime advisers, Chow wrote:

“ … we have asked the Corps of Engineers to help us investigate adaptation strategies … that include increasing the width and depths of the channels and basins, a secondary outlet through Kalihi Channel, and a lock and dam system that will help to control water levels within Honolulu Harbor. These are definitely costly modifications, but Honolulu Harbor is vital to Hawaii’s existence and we cannot afford not to address these needs.”

Chow argues that the lock and dam system for Honolulu Harbor will be less disruptive and less costly than incremental upgrades as sea levels rise:

“To combat sea level rise, DOTH is faced with elevating piers, wharfs, operational areas, facilities, and utilities, all of which will be disruptive to the maritime industry, costly, and may also require modifications to maritime equipment and vessels. As an alternative, the concept of a lock and dam system for Honolulu Harbor channels to control water levels within the harbor is being considered. It is a novel idea but has the potential to result in significant long term benefits.”

Chow believes there is “a good chance that the feasibility study will be funded in Federal fiscal year 2022 by the application of Congress’ Community Project Funding (CPF)” and asks for support from the harbors’ group “convincing Congress to fund the Honolulu Harbor feasibility study.”

As a landlord port, DOTH is “greatly involved in ensuring that our shoreside facilities are designed, constructed and maintained to provide the maximum safety, efficiency, and resiliency. Chow added, “we are making our largest investment in Hawaii’s harbors thus far … (in) the construction of the Kapalama Container Terminal, at over half a billion dollars.”

While the feasibility study is on Honolulu Harbor, “what we do and learn through the study will and can be applied to other Hawaii harbors, “ Chow told AJOT.

The system is not new. The Benelux ports of Antwerp and Amsterdam already employ a lock and dam system and the real question is whether Honolulu will be the first of many U.S. ports use the strategy to stem the rising tide.