The two announcements signal moves away from fossil fuel powered ships in the container shipping sector.

In March, Maersk announced that “To boost the global production capacity of green methanol, A.P. Møller - Maersk (Maersk) enters strategic partnerships with six leading companies with the intent of sourcing at least 730,000 tonnes/year by end of 2025.”

In February, MPCCS announced that it and the “Mærsk Mc-Kinney Møller Center for Zero Carbon Shipping have signed a project support agreement making MPC Container Ships ASA an official supporter to the Center.”

In July, MPCCS had announced features of the 1,300 TEU ships project:

Constantin Baack, told AJOT: “The design of the 1,300 TEU vessels was largely inspired by NCL. We are the tonnage provider. North Sea Container Line … adopted the idea of placing the accommodations on the foreship of the vessel. This provides protection for the containers from stormy wind conditions in the North Sea. This feature also reduces obstructions for container cranes that then do not have to maneuver around accommodations when they are placed in the midship or aftship position as is traditional on container ships.”

Baack added: “A second consideration was the need to accommodate larger fuel tanks … Methanol generates half the kilowatt/hour/liter that MGO generates. As a result, twice as much fuel is required for green methanol as opposed to MGO. A third factor is the deckhouse on the foreship has better line of sight, which is important when maneuvering in and out of the Norwegian fjords. In addition, the two vessels will have dynamic positioning, so they are extremely maneuverable.”

Baack said the normal fuel capacity for a 1,300 TEU vessel in its planned trade is “5,500 metric tons per annum which includes 1,000 tons for the auxiliary engine. In the case of green methanol, the fuel consumption is double, equaling 11,000 tons per annum.”

He said the two ships will operate between several Norwegian ports, and on to Hamburg, Germany and Rotterdam, Netherlands:

“The travel time is 14 days and 2,700 nautical miles, of which seven to eight days are at sea and six to seven days are at port with an average speed of 15.5 knots. As a result, it is possible to accurately predict the fuel consumption of the vessel on an annual basis.

In terms of the cost, MGO fuel has been running between $1,200 and $1,000 per ton. The forward price for green methanol is running at $950 per ton but requires twice as much fuel as an MGO powered vessel. The result is that the operational cost is higher than on a diesel-powered vessel.”

To help alleviate the cost differential, Baack said the company will benefit from a new European Union program:

“The European Union is establishing the Emission Trading System (ETS) … to start as of 1 Jan 2023 (with CO2 measurements), emission certificates will have to be procured likely as of 1 January 2024. This will help reduce the price gap, but it will not eliminate it.”

Subsidies provided by the Norwegian government will help reduce the gap further.

Baack cited the following additional features on the new ships:

Pal Saetre, MPCCS Executive VP and GM Norway noted: “North Sea Container Line will have a 15-year charter with MPCCS to operate the two 1,300 TEU vessels. This charter includes a 15-year affreightment agreement with Elkem and others.”

Saetre went on to say: “In Norway the government and the public have looked beyond the oil and gas investments that have benefitted the country since the 1970’s. Today, Europe is in transition towards a renewable economy and Norway and the Norwegian government have been at the forefront in investing in renewable resources. The government has provided subsidies and incentives towards this end and has provided supports for the methanol-powered MPC Container Ships … Another example of Norway’s commitment is that more electric vehicles are being bought in Norway than in any other country in the EU.”

He remarked that Elkem has a 40% ownership in North Sea Container Lines: “We don't know if Elkem will pick up freight at  at 20 ports along the Norwegian coast and then sail the ships to Hamburg and Rotterdam. But we do know that NCL will visit 20 ports on a round trip voyage.  Elkem has a 15-year affreightment agreement with NCL and will utilize approximately 30% of the capacity of the two vessels. Other shippers will be utilizing the vessels for other cargoes. Elkem is involved in a carbon capture project in which it plans to create methanol as a product for downstream uses.”

According to Elkem’s website, the company “… develops silicones, silicon products and carbon solutions by combining natural raw materials, renewable energy and human ingenuity." These materials “create and improve essential innovations like electric mobility, digital communications, health and personal care as well as smarter and more sustainable cities.” In 2021, “Elkem obtained a Platinum score from EcoVadis, which rated the company among the world's top 1% on sustainability transparency, and the company achieved an operating income of NOK 33.7 billion (about U.S.$3.5 billion.)”

As noted, another collaboration is with the Maersk Mc-Kinney Møller Center for Zero Carbon Shipping. MPCCS provides one full time employee as its contribution to the project: “This provides us and them with research and sharing of information on issues related to decarbonization.”

MPCCS had earlier announced that it will contribute to the Maersk Center work “with market analysis capabilities building industry insight and strategic industry and policy recommendations focusing on the decarbonization of the maritime sector.”

In March, Maersk announced: “… strategic partnerships with six leading companies with the intent of sourcing at least 730,000 tonnes/year by end of 2025.”

The six companies are CIMC ENRIC, European Energy, Green Technology Bank, Orsted, Proman, and WasteFuel. Maersk explained: “With this production capacity, by the end of 2025 at the latest, Maersk will reach well beyond the green methanol needed for the first 12 green container vessels currently on order.” In December 2021 Maersk announced, “the design of our eight groundbreaking and industry-leading 16,000 TEU container vessels powered by carbon-neutral methanol.”

The new Maersk ships will also move the accommodations section and bridge to the foreship just as the MPC Container Ships have planned.

Maersk said the new design “… allows a 20% improved energy efficiency per transported container, when comparing to the industry average for vessels in this size. Additionally, the entire series is expected to save around one million tons of annual CO2 emissions, offering our customers carbon-neutral transportation at scale on ocean trades.” 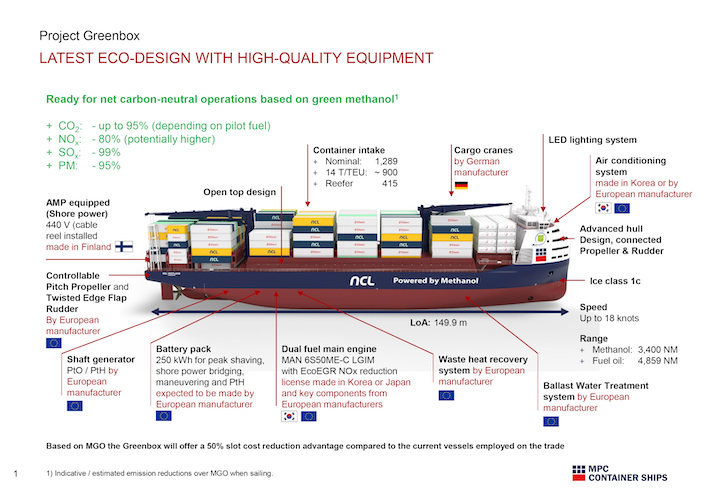