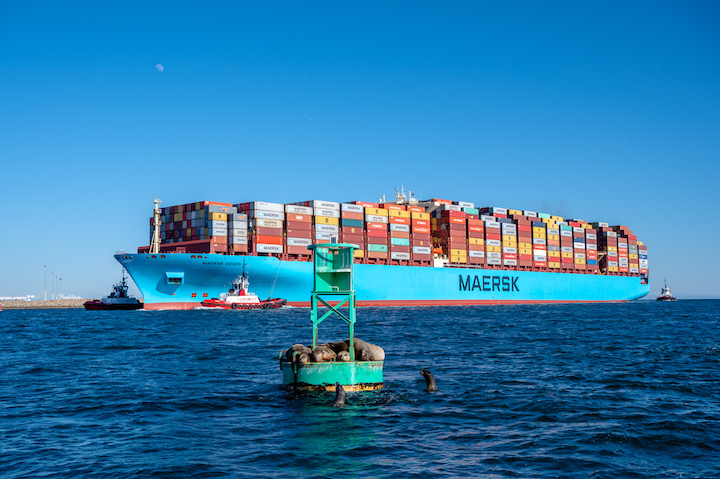 In June, the International Maritime Organization (IMO) will be reviewing a plan to assess ocean carriers between U.S. $5-to-6 billion dollars to develop alternative fuels that will substantially decarbonize marine engines by 2050, according to John Butler, President of the World Shipping Council.

On April 15th, Butler testified before the House of Representatives Subcommittee on Coast Guard and Maritime Transportation chaired by Representative Salud Carbajal (D-CA).

Butler said the proposal is to “set up an International Maritime Research and Development Board (IMRB) that would manage a $5-6 billion industry-funded research and development (R&D) effort over a 10-to-12 year period to identify the fuels and related technologies of the future” and meet “the IMO’s aggressive decarbonization goals.”

The shipping industry “would fund this R&D effort through mandatory contributions.”

Butler explained that while the IMO 2030 greenhouse gas (GHG) goal can be “met by operational and design modifications applicable to a fleet that remains fossil-fuel based, the (IMO) 2050 reduction goal, and the move thereafter to a zero or near-zero GHG emission status for ocean shipping, cannot be met by an industry that uses fossil fuels as its propulsion base.”

The IMO is an agency of the United Nations.

At the same time, Representative Carbajal has proposed the Expanding Maritime Environmental and Technical Assistance Program (META) Act which supports the reduction of air emissions from ports and vessels by authorizing an additional $3 million for the Maritime Environmental and Technical Assistance Program. The legislation is supported by Representative Bob Gibbs (R-OH), who co-led the legislation in the House and Senator Edward Markey (D-MA) who introduced companion legislation in the Senate.

“The challenge the industry faces are that while there are promising possibilities for the fuels of the future, none of the candidate fuels available today can be used to power large ships serving trans-oceanic routes. Hydrogen, ammonia, and other fuels have been identified as potential replacements for fossil fuels in marine applications, but these fuels present safety, storage, handling, and production challenges that must be overcome before they are practically and safely available for widespread use. There may also be additional zero GHG emission options that have not yet received the same level of examination.

Vessels that sail across oceans must obviously carry their fuel with them, and that means fuels must be safe to handle and carry, must be energy-dense so that they do not displace too much cargo space, and must be widely available. All of these criteria represent technical challenges that will require substantial effort and engineering expertise to resolve. The solutions to these challenges will not simply appear by themselves.”

U.S. support for the new program is vital, Butler said: “The United States’ support for the IMRB proposal … will be critical to its approval and success. We therefore encourage the U.S. Congress to urge the Administration to communicate its support.”

“In March of this year we announced that our first carbon neutral container vessel will be operational by 2023. This has been made possible by the advances in technology, our strategic commitment to sustainable practices ... Powered by bio methanol or e-methanol, this feeder vessel will pilot an industry-first, scalable carbon neutral product…”

Dan Rutherford, Program Director, Marine and Aviation International Council on Clean Transportation testified that: “In 2018, global shipping (was) emitting about a gigatonne of carbon dioxide (CO2), or more than the German and Dutch economies combined. Much work lies ahead if the sector is to meet the United Nations’ goal of cutting GHG emissions from international shipping by at least 50% from 2008 levels by 2050… “

In order to meet this goal, Rutherford says: “We’ll need zero emission deep sea ships on the water by no later than 2030. Key technologies include battery electric ships for near-port operations and short sea shipping; hydrogen, which in pressured or cryogenic form can power fuel cells that are already available and scalable; and ammonia, which is gaining attention as an easy-to-store hydrogen carrier. These fuels can be generated from abundant renewable electricity with a negligible climate footprint. Today, we’re already seeing fully battery electric and fuel cell zero-emission vessels, especially ferries and barges on short, dedicated routes.”

As for ocean-going vessels “We expect full-sized, deep sea zero-emission vessels running on hydrogen fuel cells or burning renewable ammonia to be possible as soon as 2030. Hybrid or fully zero-emission regional cargo ships will be available even sooner. Technologies like wind-assisted propulsion and hull air lubrication will help reduce energy use and make zero carbon fuels more competitive.”

Rutherford warned against the investment in LNG powered vessels: “Biofuels and liquefied natural gas (LNG) are being used now, but neither is a reliable bridge to zero-emission vessels.”

The prospect of zero emission vessels creates an opportunity for American business:

“The production and sale of zero emission marine fuels in particular is a major opportunity for US businesses. Today, the largest vessels visiting US ports are often fueled abroad, not here at home. Producing zero emission marine fuels like electricity, hydrogen, and ammonia domestically will provide new economic opportunities for Americans while protecting vulnerable near-port communities. “

Kristin Decas, Port Director, Port of Hueneme, testified that “California Ports such as the Port of Hueneme have been early adopters of green technology solutions. California ports are the pioneers of testing, innovating and taking on the risk of implementing new technologies that lower emissions.”