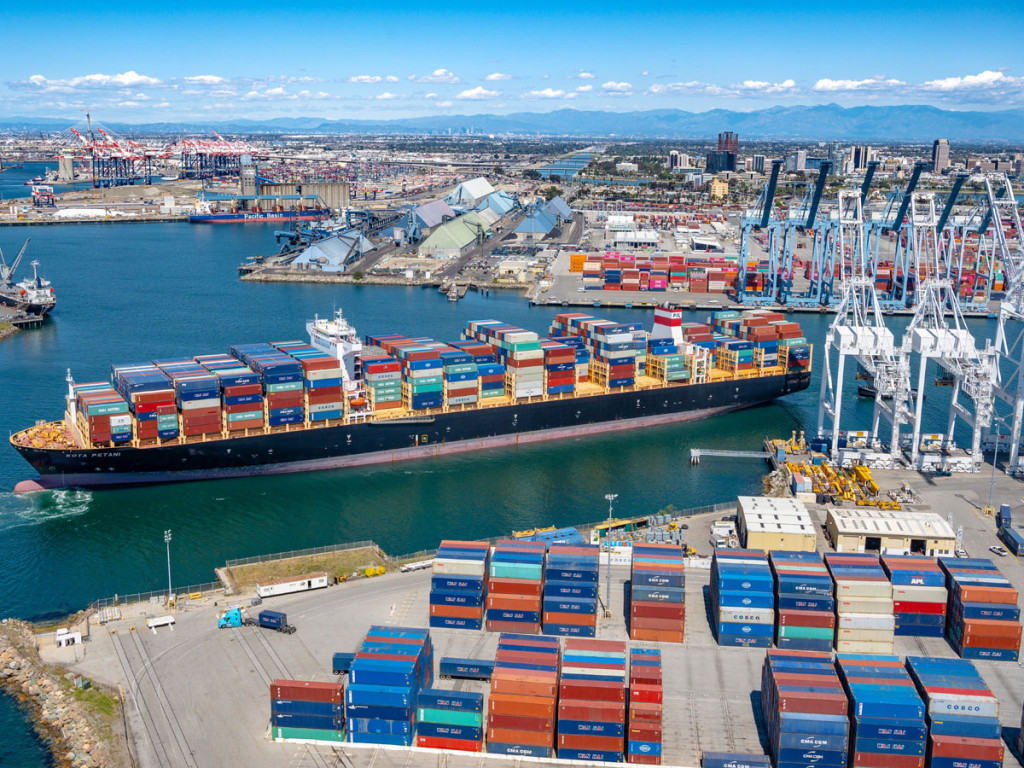 The report warns: “There is concern associated with the potentially significant increased load demand on the California electrical grid, compounded by similar electrification of related transportation and manufacturing industries such as the trucks providing drayage services to California’s ports.”

The report is accompanied by a summary entitled “Report Raises Concern of Power Shortage for Green Ports, PMSA Warns about Fallout to the Supply Chain” provided by PMSA’s President John McLaurin, which states:

Challenges in the transition to zero emissions and electrification cited in the PMSA and Moffat & Nichol report particularly focus on the Port of Los Angeles and Long Beach and include:

“As part of emission reduction efforts, California is embarked on an effort to electrify transportation, including port operations. This trend is spurred by California Air Resource Board (CARB) rulemaking, ports of Los Angeles and Long Beach’s Clean Air Action Plan (CAAP) program that includes 2030 requirements for zero emission container handling equipment (ZE CHE) operating in their terminals, and California Governor Newsom’s executive order banning the sale of diesel and gasoline powered equipment starting in 2035. The result will be state-wide impacts for existing marine terminal operations and may lead to California requiring zero emission marine terminals that are electrical grid dependent. There is concern associated with the potentially significant increased load demand on the California electrical grid, compounded by similar electrification of related transportation and manufacturing industries such as the trucks providing drayage services to California’s ports … Electrification of all CHE will increase CHE on-terminal power demand from the current level of about 2 MW (Megawatts) per 1M (Million) annual TEU at most terminals to about 8.4 and 8.0 MW per 1M annual TEU in 2035 and 2040, respectively ... 1 MW can power between 400 and 900 U.S. households …”

Terminal Electrification Plans and the ILWU

Three terminals at Los Angeles and Long Beach have adopted electrification of cargo-handling operations that also automate some operations. These transitions have drawn vigorous opposition from the International Longshore and Warehouse Union (ILWU).

On May 17th, Total Terminals International (TTI) located at the Port of Long Beach announced plans to become the fourth terminal at the Los Angeles/ Long Beach complex to transition to increased electrification and automation. TTI officials met with ILWU union leaders on May 17, to outline their plans for a transition to automating the 385-acre site known as the Hanjin Terminal.

The other three terminals are at Long Beach: Long Beach Container Terminal and at Los Angeles: TRAPAC Terminal and APM Terminal. APM’s automation plans met with strong opposition from the ILWU before it was implemented.

The Long Beach Press Telegram reported that after the May 17th meeting: “TTI representatives were not available for comments. However, the International Longshore and Warehouse Union was quick to respond after the meeting, saying the proposal threatened US jobs and the local economy. Representatives of ILWU locals 13, 63 and 94 attended the meeting.”

The recent controversies have raised concerns that automation, and by extension electrification, may become a contentious issue in reaching a new longshore labor agreement during 2022 contract negotiations. The negotiations will be conducted by the ILWU and the Pacific Maritime Association which represents 70 ocean carriers and terminal operators who operate at the 29 West Coast ports.

However, there is evidence to indicate that the PMSA report may overstate the problem of electrification:

1) Both Long Beach Container Terminal and TRAPAC terminals report that, as a result of more automated and electrified operations, average truck waiting times (to load and unload containers at their terminals) are under 40 minutes. This is half the time experienced at non-automated terminals. This means that twice as many trucks can load and unload at LBCT and TRAPAC compared to the non-automated terminals – a key productivity metric.

Alex Milley, assistant vice president for health, safety, security, environment, at the Port of Los Angeles’ TRAPAC container terminal is optimistic about the potential for zero emission technologies to improve cargo-handling productivity. “Until recently I did not think that the CAAP 2030 date for transitioning to zero emission equipment was practical, but thanks to the availability of Teslas and other electric cars and the availability of electric powered cargo-handling equipment you can see that zero emission technologies are getting affordable and available.”

2) Ben Chavdarian, senior electrical engineer at P2S Engineering wrote in a June 9th email that properly applied electrical demand can substantially reduce the cost of electrical installations and maintenance for trucks and cargo-handling equipment. Among other factors, this is based on the kilovolt ampere (KVA) requirement for each truck or piece of equipment. He wrote that a properly applied KVA requirement “would reduce installation cost by 50% to 75% compared to an installation without such considerations.” He adds that in some cases, “the maintenance cost will be eliminated altogether.” He provided more detail in an article entitled “Best Practices for Cost-Effective Electrification of Port Equipment” that appeared in the P2S Magazine.

3) A second electrical engineer, who asked not to be identified, said that the growth in solar power in the next five years will increase electrical capacity in California so as to easily absorb new demand from California port electrification.

“We currently have several solar installations and one new system with an 864-kwh capability here in Ontario (California). The solar system backed by storage batteries will allow us to charge the batteries and use the batteries to charge the trucks at night when the sun goes down. The system can also provide electricity to the grid and reduce DHE’s utility bill. So, we could eventually charge our trucks at no cost while generating revenues from sales of electricity to the grid. If trucking fleets did this all over California, we would provide Edison and PG&E with a backup power supply that would alleviate power outages and the need to contract for peak capacity suppliers during heat waves.”

A big worry for fleet owners is “what happens if the power goes out and what happens if there aren’t enough charging stations.” The answer, he says, is that the microgrid reduces the fleet’s exposure by establishing an independent power source.

5) Bill Van Amburg is the executive vice-president at CALSTART, which is a non-profit that promotes clean transportation. Van Amburg sees progress with the transition to zero emission trucks: “There has been an improvement in the relationship that CARB (California Air Resources Board) has with private industry in California and recent regulations to establish zero emission goals for all diesel trucks by 2045 and harbor drayage trucks by 2035 are in line with incentives and zero emission technology that is developing to support the transformation of trucking and other vehicles from diesel power to electric power.”

Van Amburg argues that rather than costing jobs, deployment of zero emission technology will create new jobs and economic development: “The sum total of the investment in zero emission trucks and vehicles is that it is creating a multitude of economic opportunities to transform commercial vehicles from diesel fuel to zero emission power and reduce long term costs for fleet operators, owner/operators and ultimately for shippers. The investment being made right now at the Ports of Los Angeles and Long Beach will give the two ports a big lead in reducing truck and equipment costs that also eliminate pollution and respiratory illnesses afflicting communities and help California transform itself into a zero-emission economy that also reduces the effect of global warming.”

The investment in battery storage “for truck fleets and other businesses creates an additional revenue stream for microgrids that allows the fleet to store electricity at peak production times (for instance, when solar production is high) that it can use itself or sell back to the grid during high demand times; this will help reduce the acquisition costs of zero emission.”

6) The PMSA projections on electrical power needs at California ports can also be reduced if hydrogen fuel-cell trucks and cargo-handling equipment are deployed at the ports. Under the $82.5 million Shore-to-Store (S2S) project, the Port of Los Angeles and more than a dozen public and private sector partners have teamed up for a 12-month demonstration of zero-emission Class 8 trucks and will expand the project to include five more hydrogen-fueled heavy-duty trucks, two battery-electric yard tractors, and two battery-electric forklifts. (See AJOT June 7th story “Port of Los Angeles, Toyota, Kenworth partner on hydrogen fuel cell Class 8 trucks.”)

The PMSA/Moffat & Nichol report has provided an outline of electrical power requirements that California ports need to factor in planning for the transition to zero-emission trucks and equipment. However, electrification and increased automation are already increasing productivity at the TRAPAC terminal in Los Angeles and at Long Beach Container Terminal at Long Beach where trucks can pick up and deliver containers in half the time required at non-automated terminals. Trucking companies, such as DHE plan to reduce their grid dependency by developing microgrids based on solar energy and battery storage. New hydrogen fuel cells trucks and cargo-handling equipment planned by Toyota, Kenworth and the Port of Los Angeles will also create new renewable energy businesses without taxing the California grid. New solar installations will boost renewable energy generation into the California grid and this will soon be supplemented by new offshore wind farms off the coast of California and a new offshore wind farm port at Humboldt Bay in Northern California. All of these new developments and jobs validate the Clean Air Action Plan programs at the Ports of Los Angeles and Long Beach.

And in the end, the move to zero emissions is a necessary and achievable goal likely to be beneficial to the ports, PMSA and ILWU, whereas the alternative most certainly is not.