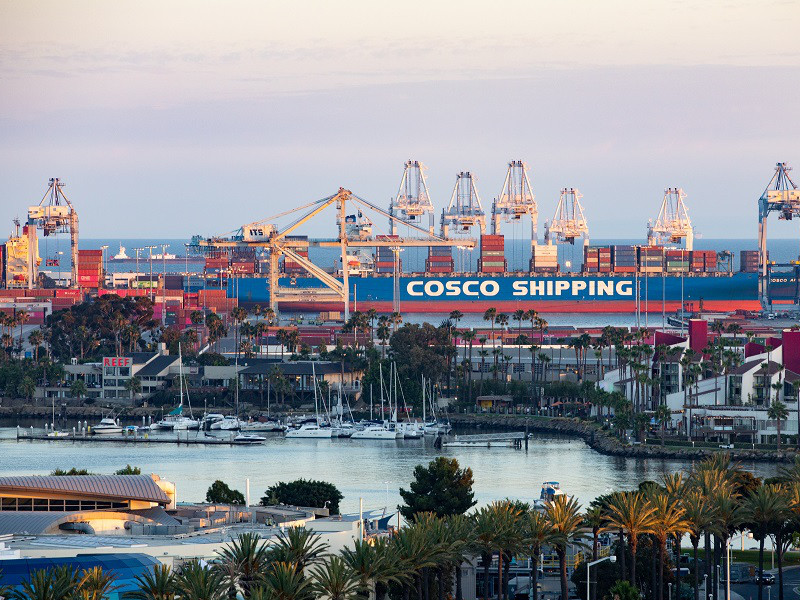 The decision by the Union Pacific (UP) railroad to suspend service from West Coast ports to Chicago for one week could be positive, according to Noel Hacegaba, deputy executive director, Port of Long Beach.

“International supply chains have been straining under the weight of economic growth since the early stages of the COVID-19 recovery. Container processing at port terminals in Southern California has increased and Union Pacific’s rail shipments to and from the ports have risen and are near record highs. Union Pacific is concurrently experiencing significant congestion at our inland intermodal terminals, most notably in Chicago …

This week, we reached out to the ocean carriers to take more positive steps to improve fluidity and throughput in the Los Angeles Basin and our Global IV facility in Chicago. One of these steps include a temporary suspension of eastbound movement from the West Coast Port Terminals (including Los Angeles, Long Beach, Oakland, and Tacoma) moving to Global IV for approximately 7 days. We believe this change will allow the transportation supply chain to begin working off the backlog of Global IV destined trains, while freeing up railcar assets to support import loading needs on the West Coast. We are working closely with the ocean carriers and collaborating wherever possible to improve the health of the supply chain.”

In an interview with AJOT, Hacegaba said: “Look: the whole supply chain has been stressed since Covid not just the railroads. In order to alleviate that pressure, the railroads have had to resort to some temporary suspensions of service. I hope that the decision by the UP will allow them to reduce the backlog of containers and restore fluidity to the system.”

Hacegaba said that the UP suspension comes at an opportune time because of the temporary shutdown of South China ports, including the Port of Yantian, due to a Covid outbreak:

“This has caused a temporary lull in container shipments from China that will soon end with a renewed surge which we expect by the end of July.”

The UP suspension is likely to cause backups at West Coast ports, Bill Stephens at Trains.com reported:

“Intermodal analyst Larry Gross says UP’s move will create massive backups at West Coast ports, which are already busy as retailers are looking to keep up with consumer demand and aim to restock depleted inventories at their warehouses and store shelves.

As many as 40,000 twenty-foot equivalent units — or TEUs … will be stuck at West Coast ports over the next week due to the UP embargo, Gross says. That’s equivalent to 50 double-stack trains, each with 200 wells and a capacity for 800 TEU.”

Hacegaba says that the Port of Long Beach have taken three steps to reduce congestion at its container terminals:

For June, the Pacific Merchant Shipping Association reported “the average container dwell time at the San Pedro Bay ports (Los Angeles and Long Beach), the amount of time a container stays at a marine terminal after it is unloaded from an ocean carrier, rose to 4.76 days, up from 3.96 the month before.”

The PMSA went on to explain: “The heightened dwell time is a result of an ongoing record cargo volume surge impacting the entire supply chain resulting in the lack of warehouse space, unused terminal appointments, lack of railcar availability, lack of truck capacity and equipment shortages.”

Delays are particularly pronounced for containers transported on the Union Pacific and Burlington Northern Santa Fe railroads between the two Southern California ports and Midwest destinations:

“Dwell time for containers leaving the terminal by on-dock rail increased by more than a day. Through June, the average dwell time was 11.8 days, up from the already high 10.5 days the month before. Railcar availability and system bottlenecks are impacting the railroads on a national level and this cargo is backing up on the marine terminals.”

Hacegaba says a persistent problem is with warehouses and distribution centers in Southern California not operating at full capacity.

“This is why you see street dwell times at the warehouses of a week. And what happens to the chassis that need to get back to terminals? They are stuck waiting to be unloaded at the warehouses.”

Hacegaba says a review of warehouse operations is pending with the view of helping distribution centers and warehouses increase their hours of operation: “We need to know why the warehouses aren’t operating 24/7.”

A recent Pacific Merchant Shipping Association report shows that West Coast ports have increased their import market share over East Coast and Gulf ports from 36.8% in April, 2019 to 38.9% in April, 2021.

Hacegaba is hopeful that the increase in market share for the West Coast ports will continue, as the Port of Long Beach continues to demonstrate its ability to handle larger amounts of containers than its competitors on the Gulf and Atlantic coasts:

“We really can’t complain about handling too much cargo,” he concluded.