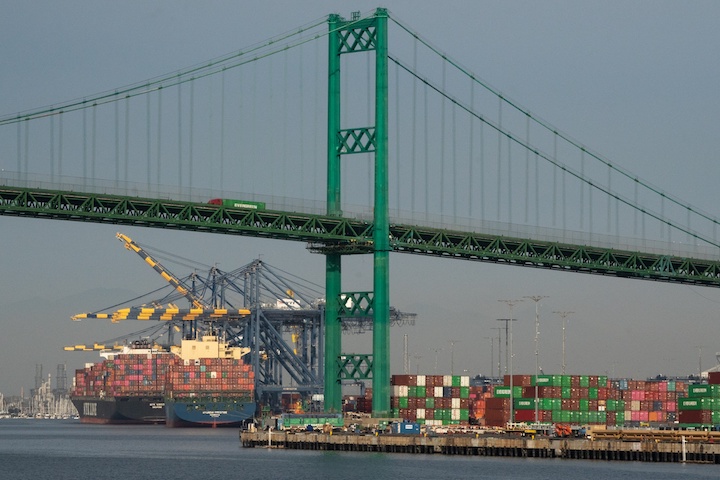 Seroka noted that the Port continues to experience record congestion and that there were currently 25 containers ships at anchor.

Seroka said the average time for ships waiting at anchor before moving to their berths for unloading has skyrocketed: “the average time was 2.5 days in November and it has risen to 8 days.” Another barometer of delays is that “street dwell times have risen from 3.5 days to 7 days….”

The huge backlog of ships and cargoes has prompted collaboration with the Port of Oakland to divert ships north to Oakland.

Seroka said he has discussed vessel diversions from Los Angeles to Oakland with the Port’s executive director Danny Wan and the maritime director Bryan Brandes.

One result of this effort, Seroka said, is that CMA has begun a new service from Asia with Oakland as the first port of call instead of Los Angeles or Long Beach.

The diversions are designed to help relieve the congestion burden on the two Southern California ports and reduce the delays of import shipments when a ship is due to arrive in Oakland and is delayed by congestion at the ports of Los Angeles and Long Beach.

Seroka said he does not believe the diversions will be permanent and will “welcome back the cargo” but right now he said: “we have to do what we can to help get ships back on schedule.”

Seroka said the backlog of cargo is so intense that it will take months to clear out.

He noted that one third of cargoes entering the Port are destined for warehouses in the Inland Empire, located in Riverside and San Bernardino Counties, east of Los Angeles County. He expressed the hope that more night time truck deliveries and offers of additional warehouse space will help ease the crush of cargo flows.

On February 1st, The Port of Los Angeles announced it was launching a new incentive program to move trucks faster and more efficiently through its terminals. The Port’s Truck Turn-Time and Dual-Transaction Incentive Programs offer terminal operators two ways to earn financial rewards: one for shortening the time it takes to process trucks dropping off and/or picking up cargo, and the other for trucks handling both transactions in the same trip. “These best practices are needed now more than ever to relieve pressure on the supply chain due to the ongoing surge,” Seroka said of the program.

Seroka noted that e-commerce in the United States has doubled from 10% at the beginning of the pandemic in 2020 to 20% today and that consumer spending remains strong.

He also noted that the traditional Chinese New Year holiday, which began on February 12th , is not being fully observed in China as workers “are not going home to celebrate with family and friends” but remain working at factories that are being kept open to meet the continued high demand for goods in the United States.

Seroka was asked to comment on progress with Clean Air Action Plan (CAAP) zero emission goals embraced by the Ports of Los Angeles and Long Beach. The CAAP plans call for zero emission container handling equipment by 2030 and zero emission trucks by 2035.

Seroka said these were “ambitious goals” established by the Mayors of Los Angeles and Long Beach.

Seroka said the effort to achieve the zero emission goals required “a public private partnership” and the ability to drive down the cost of electrically powered equipment and trucks.