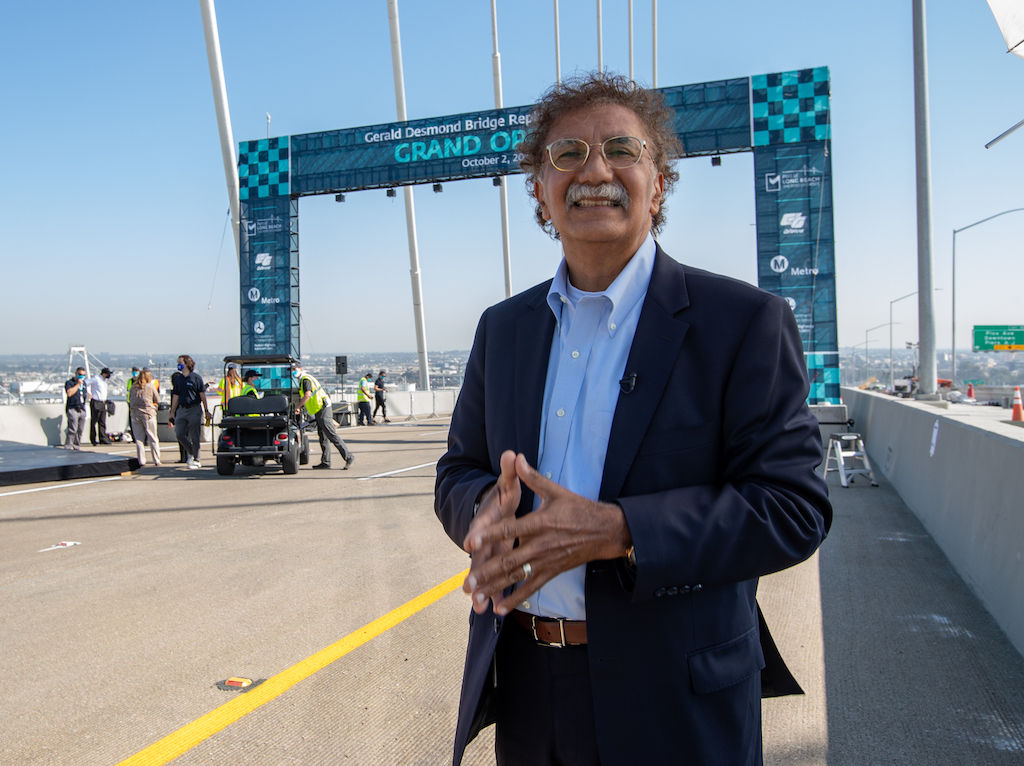 Mario Cordero, executive director, Port of Long Beach told AJOT that the Port experienced a 12.5% increase in container volumes for September, compared to September 2019, and expects the Port to have a “strong” fourth quarter in 2020.

However, he was more cautious about 2021 stating “a lot depends on the impact of the Covid virus on the economy.”

• The newly opened Port of Long Beach bridge “will help boost trade” by reducing delays and bottlenecks and increasing the flow of truck traffic between the Ports of Long Beach and Los Angeles and to Southern California freeways. The new bridge, which cost nearly $1.5 billion, increases the number of lanes in each direction to 3 compared to the 2 lanes on the old Gerald Desmond bridge. The new bridge adds an emergency lane in each direction.

• Cordero supports the efforts of Port of Los Angeles executive director Gene Seroka to boost U.S. exports that could enhance trade passing through the Long Beach and Los Angeles ports but says that progress in trade talks with China must continue to increase the sale of U.S. goods.

• Lower rail rates by the Burlington Northern Santa Fe (BNSF) and the Union Pacific (UP) would help boost imports and exports between Midwest and the Port of Long Beach and “we have had constructive conversations with the two railroads” about the need for competitive rail rates. A Pacific Maritime Association (PMA) report warned that U.S. West Coast ports could lose up to 45% of their intermodal business to the Canadian Ports of Vancouver and Rupert primarily due to high rail rates charged by the BNSF and the UP.

• He defended the Ports of Los Angeles and Long Beach’s Clean Air Action Plan that includes mandates for diesel trucks to transition to zero and near zero emission trucks by 2035: “I am optimistic that we will have the electric trucks and the charging infrastructure at this Port complex by 2035.” A Port demonstration project is already in place with 12 electric trucks and electric charging infrastructure that he says will help develop the capability to transition over to zero emission and near zero emission trucking. The Pacific Merchant Shipping Association (PMSA) sent a letter to California Governor Gavin Newsom asking that the state take action to reverse the loss of market share at West Coast ports. The letter warned about the high cost of doing business at California ports and cited air quality mandates as one factor driving business to U.S. East and Gulf Coast ports.

• Cordero supports the need for dual transactions so that a truck driver can pick up a container at one location and a deliver a container at another. This is the most efficient way to utilize trucks, chassis and minimize travel time and driver utilization, he says. However, he said that the growing concentration of ocean carriers into a small group of alliances has discouraged the collaboration that needs to happen with truckers, shippers and ocean carriers. The 2020 spate of “blank” or cancelled sailings as a result of the Covid pandemic created serious dislocations in the supply chain. The blank sailings did improve the balance sheets of ocean carriers creating a divergence of interests “that needs to be navigated.”

• He supports a chassis pool and a neutral manager so as to provide additional equipment during periods of high demand but notes that trucking companies have begun to address the shortages by buying chassis so as to maintain their own supply.

• Cordero has just assumed the chair of the American Association of Port Authorities (AAPA) and “looks forward to working with other ports to push for more U.S. infrastructure spending for ports.”