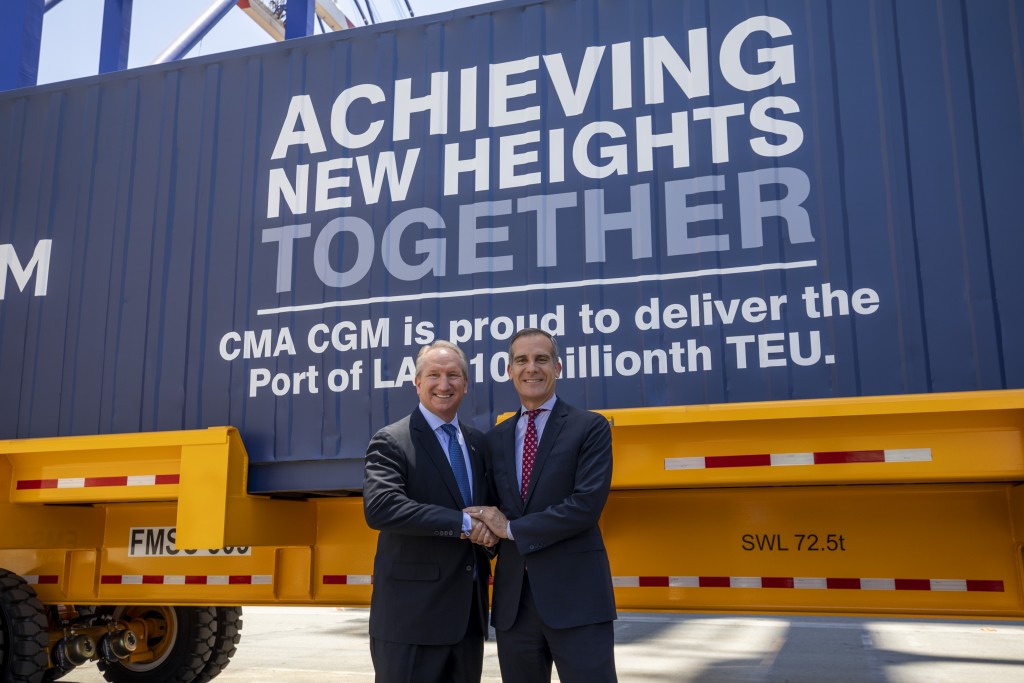 The Port of Los Angeles has become the first port in the Western Hemisphere to process 10 million container units in a 12-month period on June 10th.

Those attending the ceremony included:

The Port provided a livestream and TV satellite of the ceremony as the 10 millionth container was loaded onto a CMA CGM container vessel at the Port’s Fenix Marine Container Terminal.

“The Port is the beating heart of our economy, the backbone of our region’s prosperity, and the crossroads that makes Los Angeles a true gateway to the rest of the world,” said Mayor Eric Garcetti. “Reaching this remarkable milestone is a reflection of its role as a critical engine of the global supply chain — and a testament to our unmatched port infrastructure and highly-skilled workforce.”

“Stacked end-to-end, 10 million containers would circle the world one and a half times,” said Los Angeles Board of Harbor Commissioners President Jaime Lee. “It’s a lot of cargo to handle by any measure. We are deeply grateful to the longshore workers, truckers, terminal operators, shipping line partners and all of the stakeholders that have made this remarkable achievement possible, particularly in the face of an unprecedented pandemic.”

The Port of Los Angeles processed 1,004,222 Twenty-Foot Equivalent Units (TEUs) in May, a leap of 70% compared to last year. It was the busiest month ever in the Port’s 114-year history