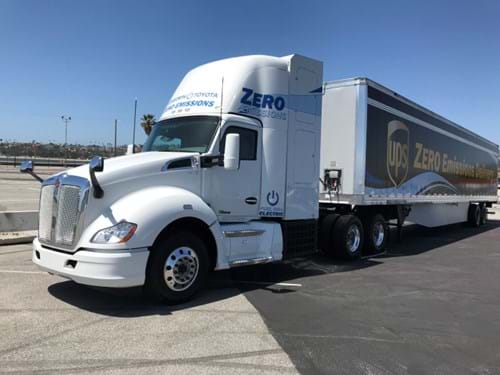 Under the $82.5 million Shore-to-Store (S2S) project, the Port of Los Angeles and more than a dozen public and private sector partners have teamed up for a 12-month demonstration of zero-emission Class 8 trucks and will expand the project to include five more hydrogen-fueled heavy-duty trucks, two battery-electric yard tractors, and two battery-electric forklifts, according to a June 7th Port announcement.

“Transporting goods between our Port and the Inland Empire is the first leg of this next journey toward a zero-emissions future,” said Port of Los Angeles Executive Director Gene Seroka. “This project is a model for developing and commercializing the next generation of clean trucks and cargo-handling equipment for the region and beyond. Just as the air we breathe extends beyond the Port’s footprint, so should the clean air and economic benefits we believe this project will yield.”

“The innovative Shore-to-Store program is helping pave the way toward commercialization of fuel cell electric technology in the transportation sector,” said Bob Carter, Executive Vice President, Sales, Toyota Motor North America. “By utilizing this technology, port operators like our own Toyota Logistics Services (TLS) can utilize a zero-emissions and scalable solution for CO2 reductions, which will contribute to cleaner air at the port and the surrounding communities where TLS operates. This is an important milestone in Toyota’s drive toward carbon neutrality.”

Toyota says the trucks have the ability to travel 300 miles on one charge of hydrogen.

In May, AJOT reported that Corvus, the Norwegian-Canadian marine battery maker will use Toyota fuel cell technology as a building block for the propulsion of vessels.

Getting e-Trucks Into Service

“Getting these trucks into service is another positive step for this groundbreaking program”, said Gordon Reimer, President, Southern Counties Express. “We have been involved with this project since the beginning, so we are excited to see the continued progress of this technology.”

“For generations, neighborhoods located next to high volume traffic corridors have experienced disproportionately high rates of air pollution and pollution-related illness, particularly in the greater Los Angeles region,” said California Air Resources Board Deputy Executive Officer Craig Segall. “We are working steadily to change this trajectory by helping to fund, support and promote comprehensive efforts like the Port of L.A.‘s Shore-to-Store Project…”