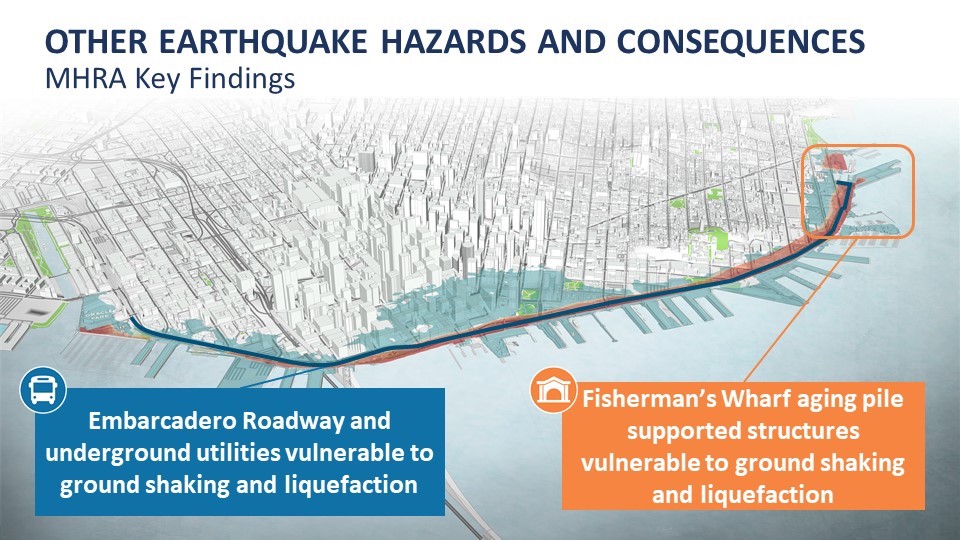 The report notes the following threats:

• Soil conditions have a big effect, creating higher and lower risk zones: “Deep Young Bay Mud is a problem in some areas and sand layers are a problem in other locations, while ground shaking and settlement” are additional problems.

• Earthquake risk to San Francisco’s waterfront is severe and the consequences will be expensive: “physical damages and understand economic losses across four earthquake levels (minimal, moderate, high, and severe). Included in the economic loss predictions are cost of repair/replacement, loss of building-related contents, business interruption and relocation, lost wages, lost rent to the Port, and indirect and induced effects. These estimates allow us to quantify the fiscal benefits of investment.”

• San Francisco’s waterfront is very sensitive to flood thresholds, with significant consequences: “We now, have predicted coastal flood damages for all buildings and major infrastructure exposed by Seawall ‘overtopping,’ which is when water, usually in the form of storm surge or a wave, reaches over the shoreline and causes inland flooding. We also have the first flood-mapping of the City that includes wave action, an important contributor to flooding.”

• The area around the Ferry Building is one of the highest risk areas on the waterfront from both earthquakes and flooding: “The subarea has some of the lowest elevations along the Embarcadero Seawall and includes areas of the shoreline that are currently overtopped by Bay waters during storm events and extreme tidal events.”

The Port is planning to prioritize projects by March 2021 that must be upgraded: “The Port’s goal is to identify the measures that are most appropriate to protect the many different conditions along the waterfront in ways that reflect city and community priorities, combining seismic and flood risk improvements wherever feasible and cost-effective.”