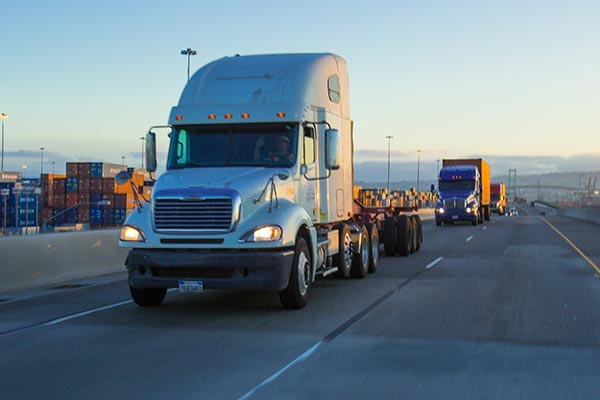 At the ports of Los Angeles and Long Beach, surging imports have left boxships awaiting berths and they are piling up like cars on the LA freeway at rush hour. However, new investments in electrical cargo-handling and electric trucks could streamline port operations, reduce emissions and lower costs. The Southern California ports plan to transition all diesel trucks working the ports to zero emissions within fourteen years. Can the goal of zero emissions really be achieved?

CAAP Could Tip Balance Between Success and Failure

The answer lies with CAAP (Clean Air Action Plan). The ports of Los Angeles and Long Beach’s promotion of the CAAP seeks to transform cargo-handling equipment and the current fleet of harbor trucks into zero emission trucks by 2030 and 2035 respectively.

If the CAAP’s 2035 goal for trucks is met, it will eliminate truck emissions that impact nearby localities and residents and reduce the cost of fuel and maintenance for harbor truckers.

Since the adoption of the original CAAP, diesel particulate emissions from mobile sources in and around the Ports are down 87%.

In January 2021, the two ports announced they had been awarded a combined $152M in grant funds to support the advancement of technology.

Heather Tomley noted: “The business challenge for truckers and trucking companies is that you can acquire a used diesel truck for $50,000 and a new electric trucks costs $350,000. So, our strategy has been to help fund demonstration projects that allow fleet operators and truckers to see how electric trucks can work and save them money.”

Tomley said the two ports have applied for a California Energy Commission and California Air Resources Board grant to fund a zero-emission trucking fleet of between 50-100 trucks to be operated by several companies so as to provide detailed data on the needs for charging, costs, maintenance and support infrastructure for trucks serving the Los Angeles and Long Beach ports.

Cannon observed that “Ultimately, it’s up to the truckers and terminal operators to make the decision about deploying this equipment and our role is to provide the support and help…”

Electric Trucks are Coming to a Port Near You

Bill Van Amburg is the executive vice president for the non-profit CALSTART, which promotes clean and zero emission trucks in California. He believes the CAAP will enhance the competitiveness of the two Southern California ports:

“Being first brings challenges and opportunities. However, the California ports are getting through the learning curve for zero emission technologies now … thanks to California investments … The other Gulf and East Coast ports will be facing the same demands and requirements for zero emissions soon …”

Van Amburg believes the 2035 zero emission truck goals are feasible because world-wide production of electric trucks is on the rise:

“The products we will need to shift to by 2035 are already entering first production this year and next: Volvo VNR electric in early production now; BYD electric tractor in production now; Peterbilt and Kenworth Class 8 tractors will enter early production in 2022, as will Navistar’s Class 8 regional tractor; Tesla is bringing its first electric semis to the road in 2021; Lion Electric has a Class 8 distribution truck. We see similar timelines in Europe and China.

Now, that does not mean this will be easy, but it is completely viable. It will require investments in infrastructure (which the utilities are authorized to make), further reductions in vehicle price as volumes scale, and new financial and ownership models to enable smaller operators to have access to these vehicles … And to help jump start the effort, CARB (California Air Resources Board), CALSTART and industry are targeting at least 800 drayage truck sales in 2021 (Project 800) to help speed the ramp up and share lessons on operation, performance and business case.”

Where the rubber meets the road there are plenty of concerns on just how the transition to electric will impact business.

For example, Scott Taylor, chairman of GSC Logistics, based in Oakland, California is concerned about the cost of new electric trucks to harbor truckers.

Taylor says the company operates three battery-powered trucks at the Port of Oakland. He says the electric truck capabilities still do not match those of diesel trucks. Even if costs and capabilities improve, he feels adoption of electric trucks by trucking companies utilizing owner/operators will be difficult: “We own three BYD electric trucks … These we acquired with grants …. We use them going from the Port to our yard and they go maybe 15-20 miles per day. We can do this because the drivers of the electric trucks are the only 3 employee drivers we have.”

Taylor says the legal mandates for owner/operators means that GSC cannot buy trucks for the drivers that contract for its business and that without changes in the law, it is up to the drivers to decide whether to acquire electric trucks. Since they have to pay off the purchase of diesel trucks that they currently own, the transition to electric trucks will be difficult.

DHE operates a long-haul trucking division but also operates 100 drayage trucks at the Ports of Los Angeles and Long Beach.

Almost all DHE drivers (94%) are employees and so are not subject to the owner/operator problems described by Scott Taylor at GSC Logistics.

“The cost of the electric tractor and truck is over twice the cost of a comparable diesel vehicle so there is a big cost difference and we need the incentives from the State to make using electric vehicle a viable option….

We have one pilot box truck that we acquired from Volvo that operates a short distance service. We could replace all 10 trucks with electric trucks. I think we start with meeting the short distance demands of the box trucks which operate during the day and can charge at night.”

“Right now, we have 5 electric trucks,” he says.

Originally, Volvo approached DHE management to acquire their battery-powered trucks and Musgrave was tasked with supervising the project:

“The drivers like driving the trucks and one said to me that ‘I would be disappointed to have to go back to a diesel.’ The electric trucks are quieter than the diesels, they have features that are similar to a diesel and in terms of performance they have the torque to pull the heavy loads just like the diesel trucks.

So … we have electric fork lifts, electric yard tractors and the box trucks. In all of the cases we see cost savings in maintenance: fewer moving parts, no engine and so no oil changes, no emission controls to maintain and repair and fueling is cheaper with electricity than with a diesel.”

Musgrave summarizes improvements that must be made:

• The cost of trucks needs to be drastically reduced.

• The truck range needs to be extended to 500 miles: “I hear Tesla say they can deliver this but we haven’t seen it.”

• The supply of batteries needs to be increased: “There was just an announcement by Tesla that they are delaying the roll out of their electric truck because they don’t have enough batteries … Battery … production needs to ramp up to keep current goals set by California and others. Another barrier to be solved.”

• Charging capacity needs to be increased.

DHE is investing in microgrids, a combination of solar energy and battery storage located at DHE facilities. This will reduce electrical truck and equipment costs by creating a DHE source of power and battery charging.

In spite of the challenges, Musgrave is optimistic: “I believe the 2035 goal of zero emission electric trucks at the ports is viable if the challenges can be met.”

One solution that could significantly advance the viability of electric vehicles is the use of hydrogen fuel cells. While hydrogen-based fuel cells are not a new technology they have now advanced to becoming commercially viable, albeit with changes in the supporting infrastructure as currently most hydrogen is a by-product of oil and gas production.

Greg Alexander, senior project manager for P2S, is working with a Southern California container terminal on a feasibility study to build a microgrid. He argues that hydrogen fuel-cells “offer the possibility of reducing the infrastructure cost by providing similar duty cycles to cars and trucks. You use filling stations to refill vehicles with hydrogen fuel and then you don’t need as much battery charging and storage. The question is how cost-effective and safe are hydrogen fuel powered vehicles and equipment?”

Toyota Motor Corp. is developing hydrogen fuel-cell powered trucks for the North American market with its subsidiary Hino Motors Ltd. Toyota said it is providing fuel-cell technology and its truck unit will supply the chassis based on its new XL Series. Toyota has been involved in a pilot project to test fuel cell trucks at the Port of Los Angeles since 2017.