Ship to shore cranes at the Port of LA 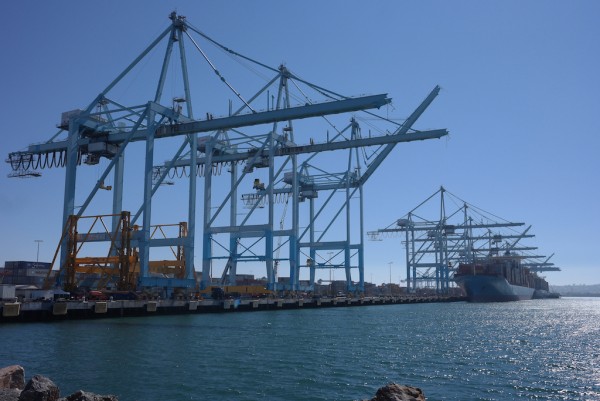 Gene Seroka, executive director of the Port of Los Angeles reported that the Port moved 9.2 million twenty-foot containers (TEUs) in 2020

“Our container business in 2020 was the most erratic we have ever seen, with volumes plunging nearly 19% in the first five months of the year, followed by an unprecedented second-half surge…Our ILWU longshore workforce did a great job adapting to the huge swings in volume, as did port truckers and everyone else involved in moving cargo through our Port. In a year of great difficulty, we are extremely grateful for the tenacity and resolve of all of our partners.”

Seroka made the announcement at the Pacific Merchant Shipping Association’s (PMSA) sixth annual State of the Port of Los Angeles, which was a virtual event.

During the State of the Port, Los Angeles Mayor Eric Garcetti spoke and praised Seroka and Port of Los Angeles employees for their success in mobilizing the supply of personal protective equipment for health care workers at local hospitals and nursing homes. This effort was organized by a new entity, Logistics Victory Los Angeles (LoVLA) in response to a national shortage of protective medical gear during the early stages of the COVID pandemic in 2020:

“I asked Gene to serve as the city’s first ever chief logistics officer on top of his responsibilities at the Port…to build a city stockpile of personal protective equipment workers in our hospitals. In just seven days Gene’s team together with (Los Angeles city agencies and workers) stood up what was essentially a new City department … (which) has provided more than 4.6 million units of PPE to three dozen LA area hospitals and 150 skilled nursing facilities. That is work that has saved lives. So, thank you to everyone who played their part in that extraordinary effort.”

Seroka noted problems faced by drayage truckers picking up and delivering containers in a timely manner as a result of congestion caused by container volume surges in the latter part of 2020. Drayage trucks currently handle about three-quarters of all import and export containers moving through the Port. In response, Seroka announced a new Truck Turn-Time and Dual-Transaction Incentive Program. Starting in February, the program will financially reward terminal operators who move containerized cargo faster and more efficiently through their terminals.

Seroka noted the progress on $473 million in Port capital projects, which include eight major terminal, rail and roadway improvements.

The Port also moved forward on its goal of zero-emission terminal equipment by 2030 and a zero-emissions drayage fleet by 2035. It currently has 16 demonstration projects underway involving the testing of 134 pieces of advanced equipment, including 78 zero-emissions trucks.

One zero-emission truck is being developed by Toyota and was featured in a video explaining how hydrogen can be the next generation fuel for trucks.

Seroka projects the cost of transitioning drayage trucks from diesel to zero-emission will cost $10 billion, but this “figure does not include the considerable public and private sector costs installing region wide infrastructure to support these trucks.”

Port Defended Against 45 Million Cyber Attacks Per Month In 2020

Seroka noted that the Port successfully defended itself against 45 million cyber intrusions per month in 2020 against systems operated by Port employees. The Port has built and continues to build up its cyber security defenses: “The discovery of widespread foreign cyber espionage targeting the US government is our latest reminder of why we need to protect supply chain data (from) cyber intrusion attempts on our IT system (that) have nearly doubled to 45 million per month.”

Seroka reiterated the Port’s focus on supply chain efficiency and optimization, calling for nationwide port data connectivity that could provide enhanced visibility, efficiency and choice for cargo owners, as well as a more stable supply chain.

In his call for further supply chain digitization, Seroka announced the development of The Control Tower, the newest in a series of Port Optimizer cloud-based data solutions. The Control Tower, developed in collaboration with Wabtec, will provide new levels of metrics and data including real-time port level views of turn times, truck capacity management information and detailed velocity metrics.

The Control Tower will follow the Port’s introduction of The Signal in 2020, a data dashboard providing a three-week-in-advance look at cargo coming into the Port. The Port also introduced The Return Signal, another real-time data tool helping truckers know when and where to return empty containers to terminals. The Signal and Return Signal are both provided as services of the Port of Los Angeles.