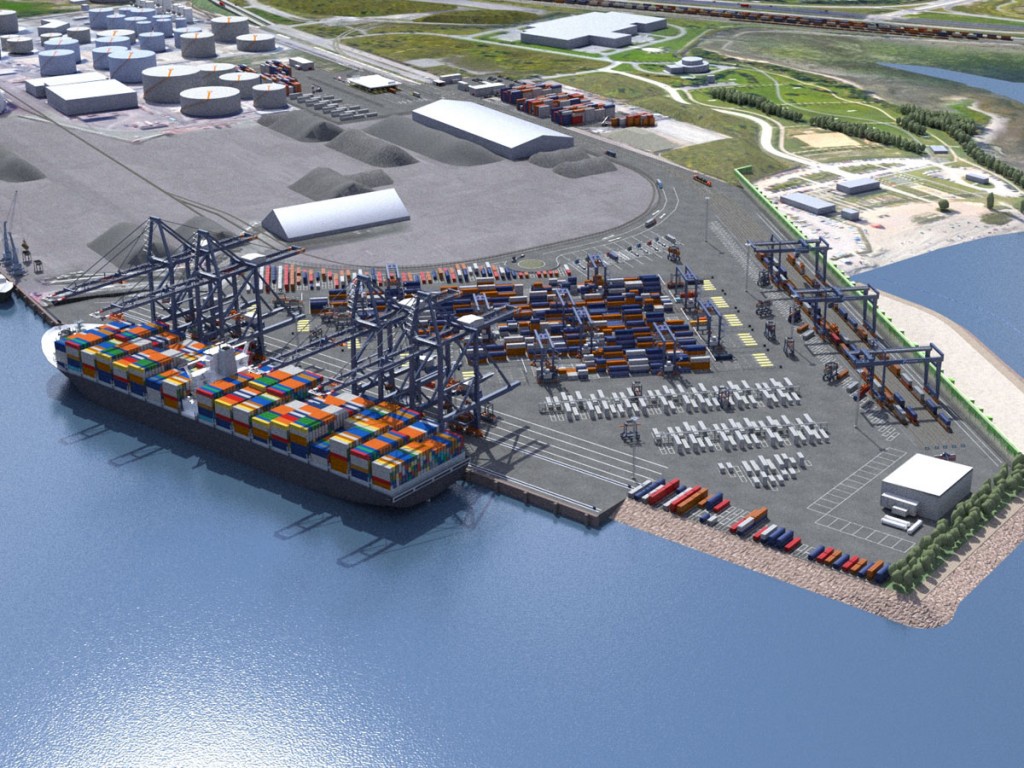 Though Canada’s federal government earlier this summer firmly rejected the Port of Quebec’s dream of building a second container port on the St. Lawrence River on the basis of serious environmental issues, there were big question marks already on the commercial viability of the Laurentia project.

First unveiled more than six years ago but beset with many delays, the 31.7 hectare (80 acres) Laurentia project extending an existing wharf by 610 metres (2,000 ft) entailed an investment of C$775 million by Hong-Kong based Hutchison Ports, CN and the Port of Québec to establish a deep water terminal conceived principally as a new marine highway between North America and Southeast Asia, targeting the Midwest market from its strategic location. Laurentia was slated to be operational by 2024, with annual capacity of 700,000 TEUs.

Upon implementation, it would have marked the return of the bulk-oriented Port of Quebec to the container sector – which it lost four decades ago when CP Ships (today part of Hapag-Lloyd) moved its North Atlantic container service to Montreal.

CN and Hutchison had pledged to inject over C$500 million in the venture. Ongoing discussions with the federal and the Quebec governments failed to yield funding commitments.

The demise of the project means Hutchison Ports will not be able to carry out its plan to establish in the Port of Quebec an East Coast gateway to North America to notably reach the Midwest market, complementing its present substantial presence in Mexico. For CN, analysts consider the railway had seen the project as an opportunity to cream away some business in the St. Lawrence trades from Canadian Pacific Railway, a major force at the Port of Montreal.

Playing a key role piloting the project was Don Krusel who spearheaded the transformation of Prince Rupert, British Columbia, into the fastest-growing container port in North America in the past decade. But was the Prince Rupert success story in a remote region transferable to a populated, environmentally-sensitive region of Quebec with an established port and a city renowned as a UNESCO Heritage site? This and other subjects were addressed during an interview by Brian Slack, a leading Canadian transportation consultant based in Montreal.

“First, I think the decision not to go ahead with Laurentia was the correct one,” he said.

“Yes, it would have allowed larger container ships to get to a Quebec port, but would it have attracted a carrier to serve such a small local market?

“Possibly, it would have been feasible by lightening the ship and continuing on to Montreal, but that added extra time in port both inbound and outbound, while an existing direct service to Montreal would have up to a four days less sailing advantage.”

Slack affirmed that “the Prince Rupert model is not applicable. That port (on the Great Circle route) has several days sailing advantage over US West Coast ports for North Asia traffic. Laurentia does not on the East Coast – but most importantly the big ships go on from Prince Rupert to 2-3 other ports to deliver cargo and pick up boxes on the same service. There is no such option in the St. Lawrence.

“Moreover, the Midwest market is too contested for a new player to exploit,” he stressed.

“The urban impact on Quebec City would have been problematic, especially rail and truck access,” Slack continued. “But an additional feature in my opinion is that the Laurentia site (in Beauport Flats area of the Port of Quebec) is too small to handle any future expansion.”

St. Lawrence market too small for another container port

In concluding, Slack declared that “the St. Lawrence market is too small to justify another container port.”

“The challenge for Montreal is to assure that in the short run it will build Contrecoeur and maintain labour peace,” he said. Regarding the C$750 million Contrecoeur terminal project, the port has recently invited national and international industry players to make proposals after obtaining substantial government financing support and favorable environmental, regulatory approval.

In addition, Slack said that the Port of Montreal should strive to increase its ship channel beyond the current level of 11.3 metres (37 feet, which allows containerships of up to 6,000 TEU capacity to call). He suggested that the St. Lawrence ship channel to Montreal did not necessarily need to attain “the up to 16 metres (50 plus feet) the US East Coast ports have been frantically spending billions of dollars to achieve, but a more modest target, in line with the trade growth of its major markets.”

Following a devastating final report from the Impact Assessment Agency of Canada (IAAC) that the latest mitigation measures proposed by the Port of Quebec were insufficient, the federal cabinet of Liberal Prime Minister Justin Trudeau announced its formal thumbs-down to Laurentia on June 29. The report determined that the project was likely to cause “direct and significant adverse environmental effects” to fish and fish habitat (in particular striped bass), air quality and human health, socio-economic conditions and the current land-use for traditional purposes by indigenous peoples.

Mario Girard, president and CEO of the Quebec Port Authority, had little choice but “to accept the verdict of the federal authorities and look to the future.”

In this connection, the Port of Quebec, which handles some 27 million metric tons annually, can continue to invest in infrastructure while playing its key role as a deepwater transshipment hub connecting the Atlantic Ocean with the Great Lakes and industrial heartland of North America. Today’s robust global agro-food and commodity markets are working in its favor. And the near future also augurs well with the post-pandemic return of activity at one of the world’s most popular cruise destinations.