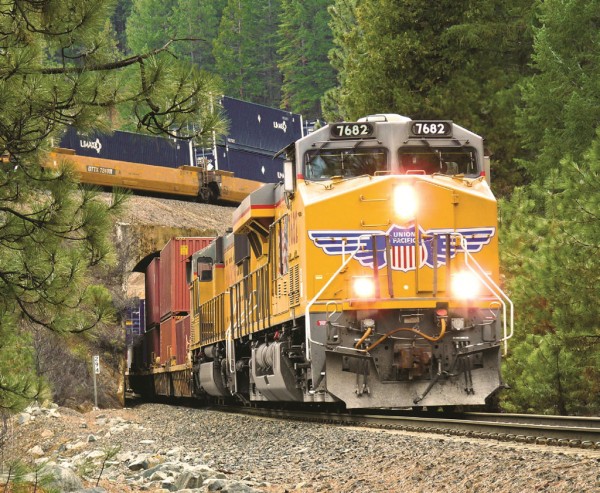 Under fire from importers and exporters for service cutbacks and from rail employees for lay-offs and followed by a seven-day rail service suspension from West Coast ports in July, Union Pacific disclosed that it has accumulated approximately $7 billion for “share repurchases.”

“With that strengthening outlook, cash generation is growing as is our plan for share repurchases, which we would target at approximately $7 billion or $1 billion more than we had originally planned.”

Asked about the $7 billion for share repurchases, a UP spokeswoman told AJOT:

“Union Pacific has worked proactively to help ease congestion in the international intermodal supply chain, despite the impact to our own service metrics. We recently temporarily paused West Coast port shipments moving east to address congestion at inland terminals and have and will continue to work closely with the ocean carriers and other stakeholders to address global supply chain challenges.

In addition, Union Pacific has spent roughly $66 billion in our network over the past two decades and will invest $2.9 billion dollars this year in capital improvements, including improvements to our infrastructure, equipment and commercial facilities.”

However, there are a growing number of complaints from shippers, freight forwarders and railroad workers that cutbacks on service, workers and equipment are motivated by so-called ‘precision scheduled railroading’ (PSR) practices. Critics say these practices focus on major cutbacks and lay-offs. The result is that rail resources are directed at profitable routes and conversely reduce and eliminate services on less profitable routes at both the Union Pacific and Burlington Northern Santa Fe railroads and other Class 1 railroads.

Critics say when PSR undermines service, it contributes to problems such as the inability of U.S. exporters to find rail bookings for shipments through the California ports of Los Angeles, Long Beach and Oakland or the ports of Seattle and Tacoma.

Fritz acknowledged the problem in the July 22nd call:

“While our financial results were impressive in the second quarter, our customers felt the impact of intermodal supply chain disruptions and costly rail equipment incidents. Within the intermodal space, we’ve taken numerous actions to mitigate the customer impact, and are actively working with all parties in the supply chain. Even so, it’s likely these issues will persist through the end of the year, as the capacity to move boxes from our ramp to the final destination falls short of demand.”

Fritz, however, defended PSR: “I want to make sure we don’t miss on the call. We’ve talked about the transitory issues that we’ve gotten in the network, we showed some of the service reflections of that. But PSR and the fact that we’ve transformed our railroad has us in a whole different ballpark of performance than these kinds of issues would have us in three, four, five years ago. And we shouldn’t miss that.”

Jeff Kauffman, an analyst identified with Vertical Research Partners, asked Hamann a follow up question about the $7 billion in which she emphasized the funds were to be used for “share repurchases” and “not working cash flow generation.” Here is the exchange:

Well, Jeff, just to clarify, when we talked about the $7 billion that’s related to share repurchases, not working cash flow generation.

And, and as you know, we are using our balance sheet and our EBITDA [Earnings Before Interest, Taxes, Depreciation, and Amortization] growth to be able to fund some of that share repurchases. So, I referenced we did the $2 billion in May, and that was funded through debt issuance. So, we do see cash growing. Some of that in terms of the free cash flow fall is impacted by the fact that we did have, and I mentioned this in my remarks, taxes year-over-year relative to the Cares Act are higher and impacting some of that free cash flow a little bit more. But the comments on the $7 billion were specific to share repurchases.

Now that answers my question. I just couldn’t get the math to work. So thank you.”

Delays in trains leaving for their destination from the Ports of Los Angeles and Long Beach, rose from 7.9 days in January of 2021 to 11.8 days in June, 2021, according to the Pacific Merchant Shipping Association July, 2021 report.

The situation got even worse when the Union Pacific announced it was suspending service July 18th for seven days to clear the backlog of thousands of containers stacked in Chicago so as to reduce the backlog of intermodal trains arriving from West Coast ports.

The suspension prompted one Northern California freight forwarder consultant to complain “it is simply a mess. I don’t even touch any rail booking with a ten-foot pole.”

Union Pacific’s response is that the suspension will result in reducing congestion and increasing fluidity in the rail system.

Sussman told AJOT that Class 1 railroads, such as UP, need to move away from the PSR model and go back to traditional railroading:

“One might think the Class 1 railroads would directly support and even fund these industries’ efforts to access their networks as a form of business development and customer service. That type of financial support in the scope and scale required is not forthcoming…”

As a result, PSR is the logical outgrowth of the Class 1 railroad strategies: