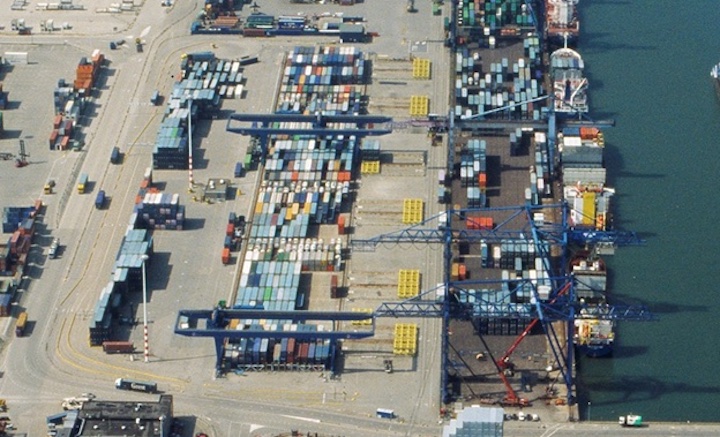 Two U.S. port officials said improvements in transportation infrastructure are necessary to avoid a repeat of current port congestion problems and cited the need for upgrades in warehousing and rail transport as well as increased worker training.

The officials composed part of a panel that discussed causes and solutions to the U.S. port congestion crisis at the International Propeller Club convention that was held virtually on October 13th.

Richard Clark, deputy director, Port of Mobile told the International Propeller Club: “You shouldn’t wait to have a heart attack before you get heart by-pass.”

Clark noted that the opening of the expanded Panama Canal has created new opportunities to relieve import congestion being experienced at Atlantic and Pacific Coast ports by shifting larger containerships to ports such as Mobile, New Orleans and Houston.

Chris Connor, president and CEO of the American Association of Port Authorities, is the former global president of Wallenius Wihelmsen Logistics, one of the world’s largest car carriers.

Connor praised the Biden Administration announcement that “it was leveraging the recently created Supply Chain Task Force and convening port leaders including Mario Cordero from Long Beach and Gene Seroka from Los Angeles as well as retailers, organized labor and other transportation modes where reportedly actions will be taken to loosen up the congestion. I think this is an important first step. It will not be the only solution.”

Ed McCarthy, chief operating officer, Georgia Ports Authority (GPA), discussed the dynamics of the congestion crisis at GPA that began in July of 2020 with the surge of e-commerce demand following the early stages of the pandemic:

“There was a shortage of truckers as long-haul and drayage drivers shifted to last mile deliveries because there was less liability. There was not enough labor at warehouses and so the warehouses couldn’t fulfill orders. As a result, containers started to stack up outside warehouses and dwell times started to increase … With all chassis now utilized and underneath containers waiting to be unloaded at warehouses there was the chassis shortages and so no way to truck import containers coming in to the ports out … So, the ports end up looking like a warehouse…”

McCarthy said one national transportation priority will be “how do we convert the truck dray to rail … I know that may not be palatable to everyone but how do we make it more short-haul trucking instead of long-haul trucking. There are containers coming in to Savannah going to North Carolina and Tennessee… How do we better utilize rail to have a more fluid infrastructure, because rail in the South Atlantic region is underutilized. There’s a tremendous amount of capacity with CSX and Norfolk Southern on the rail.”

McCarthy said the Port has the capacity to handle 2 million TEUs of rail transport but currently “’we’re only doing 750,000 TEUs - so there’s a tremendous amount of opportunity.”

He said that from the Port, “we see 4,000 trucks per week are being trucked to the Atlanta region that could be converted to rail.”

GPA has added gate hours at night and on week-ends: “The Governor has relaxed hours of service requirements for truckers to utilize night gate hours.”

The Port is supporting workforce development that includes training high school students in how to operate fork lifts and other cargo handling equipment.

He said terminals have been blamed for congestion that they have no control over and did not cause.

Normally SSA moves 1000 to 2000 containers every night to off-dock facilities that are open 24 hours per day 7 days per week. There is no extra cost to pick up these containers at the off-dock container yards.

DeNike said: “What we are seeing is that the containers are not being picked up at our off-dock facilities or at our terminals at the waterfront.”

BNSF and UP Capacity Shortfall

The congestion problem “started several months ago by the fact that the railroads (Burlington Northern Santa Fe and Union Pacific) simply could not keep up with the volume that was coming through the West Coast.” DeNike heard similar problems with rail service were happening at other terminals with the result: “The containers that were destined to go intermodal were piling up in the thousands. They were taking up room and creating havoc among all of us … The railroads have done a little better recently, but it’ still an issue.”

Since then, imports stored at container yards are the real problem: “Those are the imports that are going local. They are not being picked up. Dwell times on the terminals are 3-4 times what it would normally be. We’ve had big shippers keep containers on our docks for 30-40 days, paying demurrage which is quite expensive but they’re still keeping them (the containers) on the docks.”

As a result of warehouses not processing containers, the chassis are delayed with containers outside warehouses and not being returned to terminals so that import containers cannot be placed on the returned chassis and trucked out of the terminals. This adds to the congestion:

“SSA has 8,000 chassis that we use and own to help our terminals move containers using dray operations. We’ve lost 4,000 chassis. When I say lost…they’re not coming back (because they are delayed at warehouses). As a result, we’re not able to dray off what we would normally dray off…. our on-dock terminals are more congested because we can’t get the imports off the dock.”

On the issue of more night hours and 24-hour service at terminals: “We don’t believe that more gate hours are going to solve the problem.”

DeNike said that when SSA offers the late-night gates and tried Saturday service to help relieve congestion: “the truckers are not using the late nights. When we offer Saturday service … at our expense, and we’ve open on Saturdays at various ports … we’ve gotten very little support from the trucking and BCOs (beneficial cargo owners) …. It’s an absolute waste of money … Our rates that we get from the carriers cover Monday through Friday.”

A similar problem exists at the Port of Seattle.

“This is an infrastructure problem that cannot take the volume that’s coming through the waterfront,” DeNike concluded.

He said the downtown location gave RST the ability to offer inland trucking connections to shippers as opposed to obligating truckers to drive out and back to the main container terminals adjoining the North Sea, miles away.

RST also has direct rail connections and its cranes and terminal serve feeder ships sailing between Rotterdam, Britain, Ireland, France, Spain and other countries. RST also loads and unloads containers from inland waterway vessels that sail to and from Germany by river and avoid moving containers by highway and truck.

The advantage of this two-tiered system is that when it was initiated, it added a 50 percent increase in container handling capacity compared to the previous system, using the same landside foot print: “So in that area we went from handling 100,000 containers to handling 150,000 containers,” van Pelt said.

Van Pelt said that there is no cargo cut off until the departure of the vessel, because the terminal system is flexible and productive.

Finally, he said, RST’s multi-modal capability moves more containers by water as ‘traffic jams by trucks in Europe are a major problem.”

Admiral Karl L. Schultz, Commandant of the U.S. Coast Guard, was the keynote speaker at the Propeller Club convention. Schultz told attendees there is going to be major expansions of support vessels needed to construct and maintain offshore wind farms that will be built on the Atlantic and Pacific Coasts. The result will be an expansion of the Coast Guard’s mission. This new maritime industry will also create new jobs and vessel operations as the push for renewable energy accelerates.