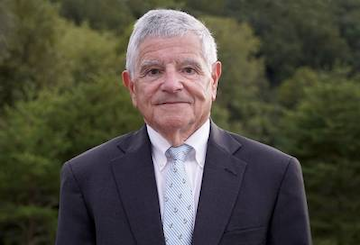 *Build up its merchant fleet to compete in international trade.

Otherwise, Patti warned, a lack of U.S. vessels in international trades made the United States vulnerable to the increasing economic dominance of China.

Patti spoke to the ‘Storms, Flooding and Sea Level Defense’ conference, produced by the Society of American Military Engineers and the Propeller Club of Northern California, that took place virtually on November 3rd.

He noted: “It is impossible not to turn on the news and not get another report on the supply chain challenges facing our country … these issues often accompanied by pictures of ships waiting to enter our ports, illustrate the importance of investing in infrastructure in and around our ports and the need to upgrade shoreside facilities.”

Patti warned that “U.S. flag vessels carry less than 2 percent of commercial cargo in our country’s foreign trades…that approximately 98 percent of U.S. exports and imports are shipped on foreign flag and foreign crewed vessels and sometimes on foreign state-owned vessels.”

This vulnerability posed a problem: “It is no secret that China has embarked on an aggressive and incredibly well-coordinated strategy to enhance its maritime presence and control and to increase its share of the world’s waterborne trade.”

The United States must increase its share of the international shipping trade or face the consequences: “Unless our nation acts to increases its share of cargo carried by our vessels, we shall find ourselves at the mercy of such vessel operations and subject to their economic blackmail and coercion.”

He noted three other challenges:

· “The lack of significant funds for dredging” of U.S. ports, rivers and inland waterways.

· The need “to embark on a realistic and comprehensive coastwise short sea shipping program.”

Patti noted the importance of smaller and inland U.S. ports and the need to increase waterborne domestic shipping citing “taking steps to increase the utilization of smaller ports and underutilized ports to handle foreign and domestic commerce.”

Patti also emphasized the importance of the U.S. built and crewed vessels as mandated by the Jones Act for U.S. waterborne transportation: “We cannot protect our economic security without having a strong, vibrant, domestic maritime industry operating along our coasts and on our rivers as well as in the international trades.”

Patti concluded by stating that the International Propeller Club of the United States “stands ready to work with …interested parties to support proposals that enhance the maritime industry and that are important to our country.”