JetBlue Airways Corp. continued its fight to acquire Spirit Airlines Inc., raising its all-cash bid yet again in response to an increased offer by rival suitor Frontier Group Holdings Inc. in the days before a crucial shareholder vote.

The newest JetBlue proposal, which won the backing of Spirit investor TIG Advisors LLC Tuesday, includes an accelerated prepayment of $2.50 a share, structured as a cash dividend to shareholders after approval of the terms. That’s up from $1.50 a share in a prior offer. JetBlue said it also increased its breakup fee to $400 million from $350 million, to be paid if antitrust regulators block the combination.

The revised bid, revealed late Monday, includes a so-called ticking fee mechanism as well, which could boost the overall value of the offer to $34.15 a share, or $3.7 billion. The pledges—marking the fifth revision for JetBlue in its effort to secure a deal—come a week after the carrier increased its bid to $33.50 a share.

TIG said in a letter to Spirit’s board that it would vote against Frontier’s proposal and the airline should instead pursue a deal with JetBlue, calling it “far superior.” The investor said both deals likely face “rigorous” antitrust reviews, so shareholders would be better off going with the proposal that compensates them during the process.

JetBlue and Frontier are seeking to woo Spirit shareholders ahead of a Thursday vote that should end the bidding war for Spirit, a deep discounter with low fares and fees for anything extra. The would-be buyers covet Spirit for the growth and competitive strength they could quickly gain through an acquisition. The US industry is dominated by four major carriers, and the victor in the war for Spirit would be ranked fifth, based on domestic passenger traffic.

Frontier struck back Tuesday, saying in a statement that JetBlue would remove capacity from the market and hike fares, making it unlikely to pass antitrust muster.

“A Spirit acquisition by JetBlue would lead to a dead end—a fact that no amount of money, bluster or misdirection will change,” Frontier said. “JetBlue’s proposal lacks any realistic likelihood of obtaining regulatory approval.”

Frontier on Friday boosted the cash portion of its bid to $4.13 a share—up about $2 from its original bid—along with 1.9126 share of its stock for each of Spirit’s. Those terms valued the airline at about $2.6 billion based on the closing price that day. Spirit shareholders would receive $2.22 a share as a cash dividend once the transaction is approved. Frontier also raised its proposed breakup fee to $350 million.

Spirit’s board has rejected JetBlue’s offers repeatedly, saying the combination would be blocked by federal antitrust enforcers. Frontier has said its proposal would give shareholders better long-term value as the airline industry recovers from the pandemic and travel demand soars.

Frontier agreed in February to acquire Spirit in a cash-and-stock deal valued at $2.9 billion at that time. JetBlue challenged the merger with an unsolicited proposal two months later, kicking off the bidding war. 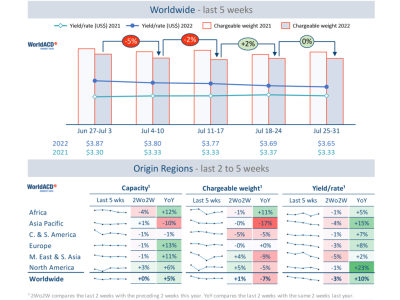