Back to work: US O&G employment to recover in 2022, reaching pre-pandemic levels in five years

Employment in the US oil and gas industry is set to rebound in the coming years and surpass pre-Covid levels, with almost 1.1 million projected workers by the end of 2027, according to Rystad Energy research. The sector shed nearly 200,000 jobs during the pandemic – a whopping 20% of the total workforce. However, on the back of high oil prices and bullish market sentiment, almost half of the jobs lost have already been recovered.

But operators are feeling the impact of inflation on their bottom lines, meaning wages are unlikely to grow significantly this year. Wage growth across the industry is expected to be a relatively meager 2.9% in 2022, but the outlook towards the middle of the decade is rosier, with wage growth in 2024 projected to approach 10%.

This employment forecast is based on Rystad Energy’s oil price scenario in which WTI oil price averages $106 per barrel this year, $70 per barrel in 2023 and $50 per barrel towards 2025.

“Fueled by a rapid rise in oil prices amid a better-than-expected demand recovery and the supply constraints brought on by Russia’s invasion of Ukraine, the US labor market seems poised to benefit and continue on a growth trajectory,” says Sumit Yadav, an analyst with Rystad Energy.

Shortly after the pandemic hit and demand dropped to previously unseen levels, the US oil and gas labor market suffered one of its most harrowing periods of job loss. Between June 2020 and May 2021, more than 100,000 jobs were lost, primarily in the drilling tools and services segment. More than 20,000 jobs – 20% of the segment’s workforce – were cut as drilling activity ground to a halt, operators doubled down on remote drilling initiatives and shelved or delayed new initiatives. The operational support and construction and installation segments were also severely impacted and lost more than 68,000 jobs combined, accounting for more than 68% of all job losses. The maintenance segment remained largely unaffected as operators prioritized maintenance over other segments.

In contrast, since May 2021, a significant number of jobs have been recovered. As of late April 2022, the industry has regained more than 100,000 jobs compared to pre-pandemic levels, and by the end of 2027, we expect the number of oil and gas jobs to marginally surpass pre-Covid employment levels.

The primary growth factor behind the steady job gains is the oil price rebound, which is expected to motivate US operators to ramp up investments to more than $90 billion annually by 2027, representing a growth of nearly 40% compared to the lows of 2020. In addition, the optimism of operators is fueled by positive developments in government policies. The most prominent is the Biden Administration’s announcement that it will lease out more than 145,000 acres of public land across nine states for drilling. The policy is aimed at increasing oil and gas production to boost national energy security and drive exports to help Europe reduce its reliance on Russian energy.

However, the complete recovery of the US labor market hinges on operators successfully navigating significant challenges, including securing financing for necessary expansions. Having burnt their fingers in the previous shale boom, many shale creditors are now adopting a more cautious approach before committing to new projects, putting a damper on the expansion plans of many operators. While E&Ps have recently enjoyed record free cash flows, which will provide better optionality to fund work independently outside financing, some companies will still need external funding, especially mid to small-sized players.

The lack of financing is further exacerbated by rampant inflation and the inevitable spike in interest rates. The US Federal Reserve is looking to curb inflation by reducing business spending, which could dampen continuous recovery in the labor market. Additionally, an acceleration of retirements across the economy, permanent employee relocation, competition from the renewable energy sector, and a limited pool of highly skilled workers, will challenge industry players looking to boost hiring activity. Amid a combination of all these factors – and spearheaded by historically high inflation – we expect the US oil and gas industry to add nearly 120,000 jobs between 2022 and 2027, meaning a compound annual growth rate (CAGR) of 2.3%, taking the total employment above pre-pandemic levels.

Inflation is taking a toll on the budgets of industry players. The average wage across the industry increased by nearly 6.3% in 2021 compared to only a 2.9% increase in 2020. However, the impressive wage growth in 2021 was primarily concentrated in low-skilled trades with a lower starting salary. Wage growth remained elusive for highly skilled oil and gas roles, such as petroleum engineers and geoscientists.

But the future outlook is promising as wages for these trades are forecast to rebound as the talent pool tightens. For instance, the supply of petroleum engineers has declined by more than 10,000 since 2019 as many workers became frustrated by frequent boom and bust cycles and moved into other industries. Young graduates are increasingly showing reluctance for oil and gas trades, instead opting for renewables. Based on figures from the end of 2021, the oil and gas industry requires an additional 8,000 petroleum engineers to capitalize on the current high oil prices. Consequently, it will need to shell out a premium to lure young graduates and existing engineers alike. The lack of highly skilled labor combined with high inflation and an increasingly demanding workforce in terms of better working conditions, flexible hours, and perks is expected to usher in high wages. Oil and gas wages are expected to grow at a rapid CAGR of 7.13% between 2022 and 2027. 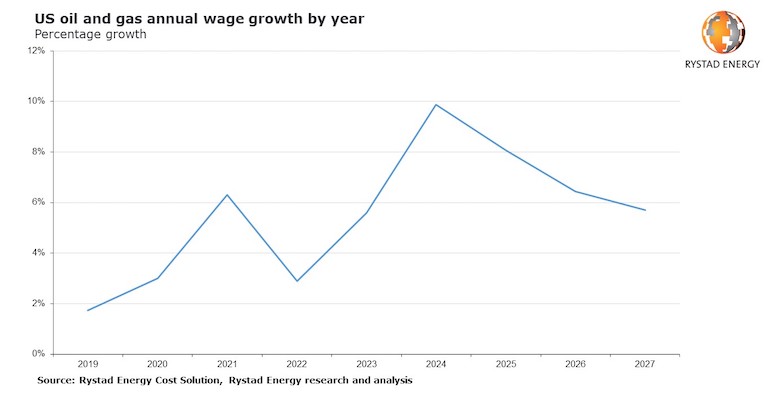