Florida Governor Ron DeSantis said supply-chain bottlenecks could worsen in the coming months, as he encouraged ships to reroute to his state’s ports.

“It has the potential to get a lot worse,” he told reporters Wednesday from Titusville, Florida. “And so Florida can really be stepping up to try to ameliorate that, particularly as we get into the holiday season.”

DeSantis has been increasingly raising the supply-chain issue, including at another event Tuesday at the Jacksonville Port Authority, as leaders in his party have attacked the White House for not doing more.

On Wednesday, the Florida governor cited a rare instance of a European container ship recently being rerouted to the Jacksonville Port Authority as evidence that his state is helping out. He said there was also a “massive” shipment coming into Florida from India this weekend.

But it’s unclear how much shipping companies are actually taking him up on the offer overall. He said the ports were offering incentives to help convince ships.

“We’ve had a lot of success directing current customers to the port of Jacksonville, and it really comes down to the size of the vessel that’s coming into smaller seaports,” said Weston LaBar, head of strategy at Cargomatic Inc., a platform that connects shippers with carriers.

There’s only so much inland infrastructure that can support large megaships, according to LaBar. While every seaport gateway can be utilized to relieve bottlenecks, overstressing resources is not the answer, he said.

DeSantis, a potential 2024 GOP presidential candidate and a frequent critic of President Joe Biden, has raised his profile nationally in part by attacking the president, and the supply-chain issue is just the latest example. He also frequently takes to Fox News to slam Biden on his handling of the U.S.-Mexico border, even though it’s playing out 1,000 miles (1,600 kilometers)from Tallahassee.

The Sunshine State’s coastline includes the world’s biggest cruise port at PortMiami, but cargo ships require highly specialized infrastructure. PortMiami last year handled about 1/9 as much cargo as the Port of Los Angeles, the busiest shipping port in the U.S., according to a ranking by Container News. Other Florida ports did even less.

The Port of Los Angeles is so popular in part because of its convenience for Asia trade, and getting those shipments to Florida would require a roundabout journey through the Panama Canal. 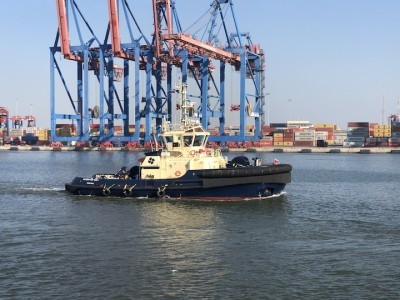