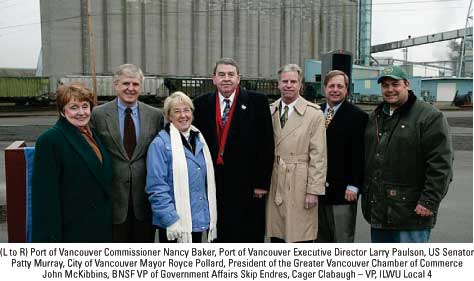 Standing in the shadow of one of the West Coast’s largest grain elevators at the Port of Vancouver on Dec. 5, US Senator Patty Murray announced a federal appropriation of $2.3 million to help expand rail and road services to the port, creating new jobs and revenue for the region.

The West Vancouver Freight Access Project is one of four Southwest Washington transportation priorities approved in the FY 2006 spending bill. Murray secured the funding as the highest-ranking Democrat on the Senate Transportation, Treasury, Housing and Urban Development Appropriations Subcommittee.

“The investment we’re making today to improve transportation infrastructure lays the foundation for future economic growth,” said Sen. Murray. “That is why I’ve worked so hard at the federal level to make critical investments in our waterways, our highways, our railways and our ports—especially along the Columbia River.”

The project is designed to help the port handle anticipated growth in international trade, including a projected doubling of grain exports by 2025, while reducing traffic congestion in downtown Vancouver and neighboring communities. The freight access project is part of the port’s Economic Development and Conservation Plan that is projected to create thousands of new jobs and increased business and local tax revenues through expansion of maritime trade and industrial operations.

“With one out of three jobs in Washington related to trade, it is vital to our economy to have sufficient road and rail systems,” said Larry Paulson, Executive Director of the Port of Vancouver, USA. “We are very appreciative of Senator Murray’s support to help build the infrastructure that will enable our community to benefit from expanding global trade.”

Currently, 5,500 direct and indirect jobs are generated by port operations on 600 acres of waterfront and industrial facilities west of Vancouver. Port plans to develop another 500-plus acres on adjacent property over the next five years will generate a projected $1 billion in local business revenue and $130 million in tax revenue for local governments and education.

The funding secured by Senator Murray will be used toward completing the Environmental Impact Statement (EIS) for the project. The port is currently moving through the federal process, required by the National Environmental Policy Act (NEPA), to analyze the project’s environmental, social and economic impacts. This includes meetings with area residents, governmental agencies and other stakeholders, and completion of the final EIS.

The port timeline calls for completion of the NEPA process in mid-2007 with construction to begin in 2008. Prospective tenants interested in a large portion of the newly-developed property would be ready to occupy facilities there within the next five years. The port’s plan also includes mitigation and habitat preservation on more than 600 acres in the Vancouver Lake lowlands to protect wildlife and conserve natural habitat areas.

Ready access to efficient land transportation, both road and rail, is a key factor for shippers in selecting a port. The freight access project includes an alternative rail line that will increase capacity for the entire Pacific Northwest rail network. The total number of rail cars entering the port is expected to triple, from 40,000 to 120,000, over the next 20 years and rail traffic through the Vancouver terminal is projected to increase from 63 to 90 freight trains per day. Passenger rail trips are expected to increase as well.

The project also includes construction of a bypass road west of the Fruit Valley neighborhood providing continuous circulation between the port, SR-501 and I-5. The NW 26th Avenue extension would limit traffic along Fruit Valley Road, past residential blocks and the elementary school, and also help relieve congestion on Mill Plain and Fourth Plain arterials to I-5. 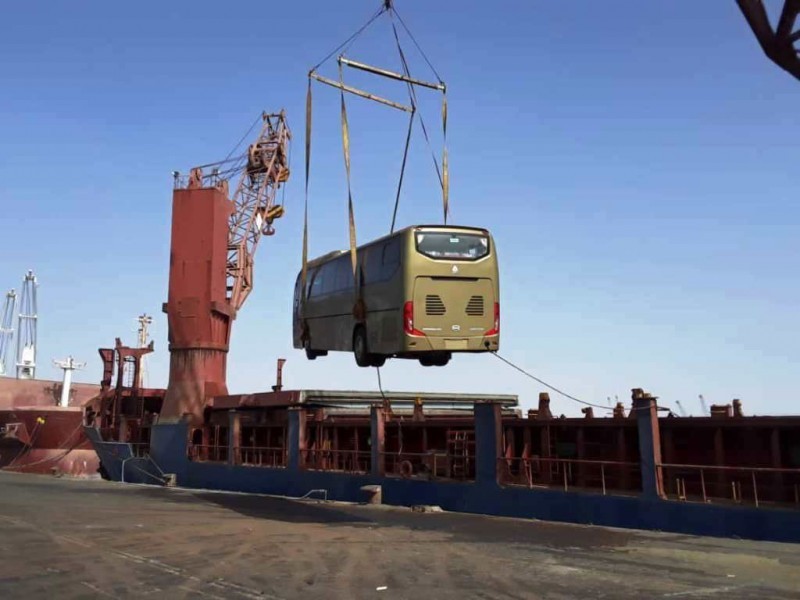