Port of Oakland import cargo volume edged up last month while the number of vessel services has been reduced. According to data released today, the Port received the equivalent of 97,850 20-foot import containers in August. That was up 1.6 percent from August 2020.

The Port contrasted rising imports with a 40 percent drop in the number of container ships calling at Oakland. According to the Port, 68 ships arrived in August, compared to 113 a year ago.

The Port attributed declining vessel calls to ship diversions earlier this year. Several carriers rerouted vessels to avoid congestion at West Coast ports that resulted from surging import volume. According to the Port, Oakland has cleared up crowding at its vessel berths and container yards.

The Port said exports shipped from Oakland declined 5.8 percent in August. For the full year through August, imports were up 14 percent and exports down 1.8 percent, the Port added.

According to the Port, import volume is expected to grow in coming months. That’s because the shipping industry is in the midst of peak season. It’s the time of year when U.S. retailers bolster inventories for upcoming holiday sales. Goods imported primarily from Asian manufacturers fill container ships and West Coast marine terminals.

The Port said imports have accounted for 55 percent of its laden container volume in 2021. Exports make up 45 percent of the cargo mix, the Port said. Oakland has traditionally reported a near 50-50 split between imports and exports. The swing toward greater import volume reflects a year-long surge in U.S. consumer spending, the Port explained. 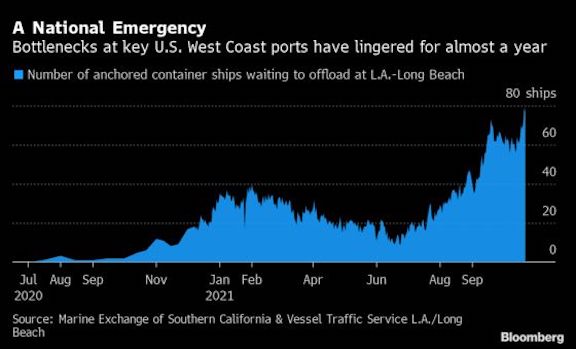