The US Inflation Reduction Act, expected to be signed into law by President Biden this week, is set to have widespread ramifications for the electric vehicle industry in the country, and may trigger some automakers to rethink where they source their materials. As well as lifting the existing sales cap on manufacturers to qualify for tax credits, the new bill aims to transform the US from an EV consumer market to an EV manufacturing hub across all types of vehicles.

“Although the act is a watered-down version of the original agenda, the implications of the bill will be significant for the electric vehicle market in the US. The incentives will undoubtedly boost EV adoption and help consumers who have been priced out of purchasing an EV to date,” says James Ley, senior vice president of energy metals research with Rystad Energy.

Rystad Energy’s electric vehicle sales projections indicate rapid growth in the US, with our base case scenario leading to 3.4 million sales in 2030. However, bolstered by the proposed tax scheme, EV sales could be likely to follow our more ambitious growth track and approach 8 million by 2030. This would be a significant jump from only around 600,000 sales in 2021. However, supply chain bottlenecks in mining and cell production could curtail sales growth.

A proposed new US tax credit on electric vehicles (EV) has presented original equipment manufacturers (OEM) with a mixed bag of potential opportunities and threats. The proposal passed the Senate earlier this week and is expected to pass a House vote and land on President Biden’s desk by the weekend. It would extend the current $7,500 tax credit for consumers buying EVs. Although the proposed tax credit would remove some limitations, it would also add new thresholds for EVs to be eligible for the incentives.

The proposed bill would remove the cap on credit, which is at 200,000 EVs sold per automaker – welcome news for OEMs such as Tesla, General Motors and Toyota which have already exceeded that limit. However, some new requirements could cause headaches for OEMs, including requirements surrounding minimum battery capacity and a cap on retail prices of various types of eligible vehicles, in addition to sourcing requirements for critical battery minerals and battery components used in eligible EVs.

Specifically, half of the critical minerals used in EV batteries by 2024 would need to be extracted or processed in a country with which the US has a free trade agreement (FTA) in effect, while in 2023, 50% of battery components would need to be manufactured or assembled in North America. The percentage of mineral sourcing requirement would move up to 80% in 2027 and onwards, while the proposal requires all battery components of EVs eligible for the tax credits to be made or assembled in North America by 2029.

The requirements in the new bill again showcase the US’s determination to cut the dependence of its battery supply chain on China. Should such requirements in the bill materialize, however, OEMs that are trying to gain more share in the US market will need to work hard to meet these requirements as the battery materials processing sector is still heavily concentrated in China and potentially down the line in Indonesia, which is looking to rival China.

US OEMs – such as Tesla, Ford and General Motors – have secured various battery minerals and materials via offtake agreements with miners and processors. Most of the agreements are for lithium, which is projected to be the battery metal most likely to run into deficit. Several of these deals are with FTA countries, but if the new proposals were passed in the US and in their current form, the EV markets could encounter future difficulties for their US models with nickel deals struck in Indonesia and New Caledonia, lithium from China and Argentina and cobalt from the Democratic Republic of Congo (DRC). 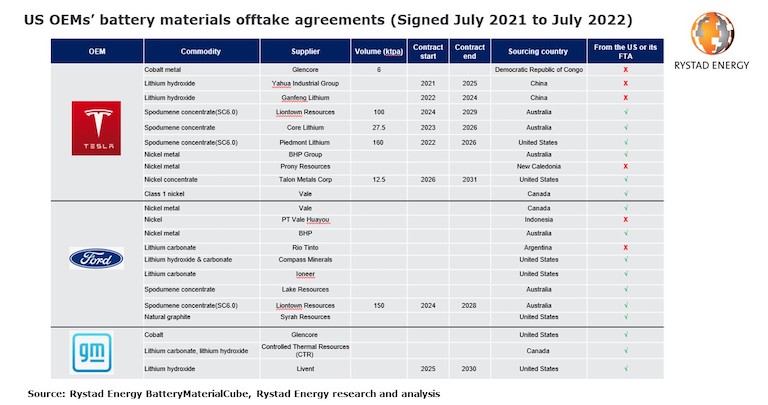 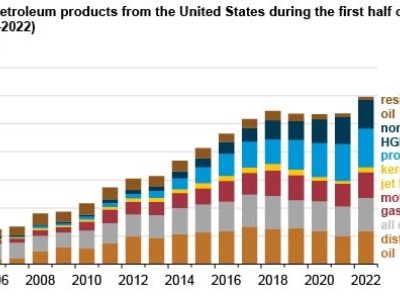