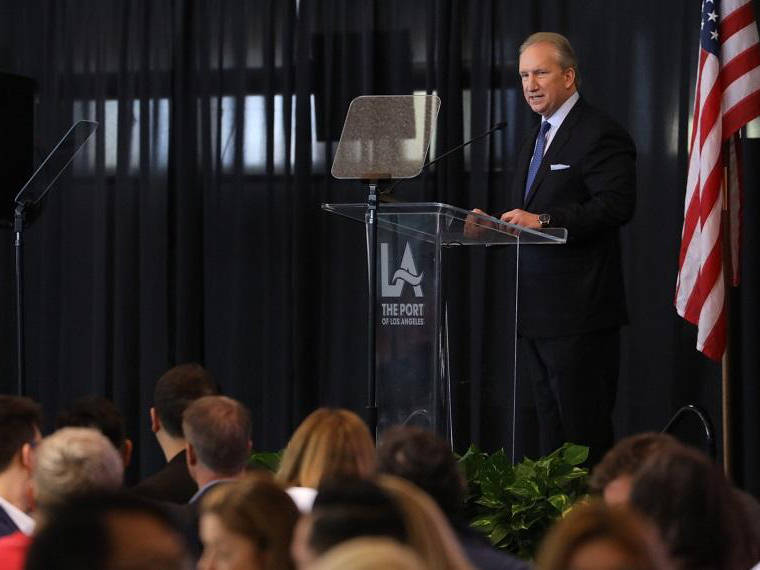 Gene Seroka the executive director of the Port of Los Angeles outlined a new strategy for the Port to regain lost market share.

The Port of Los Angeles recognizes that it has been losing market share to East and Gulf Coast ports in recent years and is now determined to engage in a sustained effort to streamline operations, improve efficiencies and enhance collaboration with Port stakeholders, Gene Seroka the Port’s executive director told AJOT.

In an interview with the AJOT, following his “State of the Port 2020” address in Los Angeles, organized by the Pacific Merchant Shipping Association (PMSA), Seroka discussed the new strategy.

Seroka said the Port had to go on the offensive to check the loss of market share:

“Well, this market share erosion is now 18 years old, so it’s not a recent phenomenon, right? The markets have shifted. I don’t think we’re going to bring every percentage point back to the West Coast, but we’re going to do three things:

As an example, in his State of the Port speech, Seroka said that the Ports of Long Beach and Los Angeles have also signed a Memorandum of Understanding to enhance cooperation between the two ports.

Seroka said he expects the process of regaining the market share initiative to be a gradual one:”...it’s going to be one day at a time, one step at a time to try to earn the business that we need to. We also have to reinvent ourselves because some of that import cargo is not going to come back to us. It’s found other pathways through the Suez Canal.”

As an example, he said: “we are going to have to be much more assertive on the export side of the business.”

An important focus will be on the service providers, “whether they’re the liner shipping companies, the railroads, the truck firms, they want to execute roundtrip economics. So, I think we need to continue to be aggressive on the export side of cargo that can move through our gateway ... “

Seroka was asked whether railroad rates charged by the Burlington Northern and Santa Fe and the Union Pacific railroads for container transport between the Port and Midwest destinations could be lower so as to help improve the Port’s competitiveness competing with East and Gulf coast ports:

“The railroads? Yeah, the rates on rail shipments, would they be better? Is there a way they could be more competitive? We’re going to look at everything ... we’ve got, we’ve had and will continue to have high level meetings with the railroads and some that are coming up real shortly. The idea here is what can we do from an efficiency standpoint? How can we keep the assets moving quickly? How can we take costs out of the system so they can be more competitive as well? I’ll let them decide on what retail and wholesale rates should look like, but everything’s on the table for me.”