“We are thrilled to be partnering with Truckers Against Trafficking as part of TIA’s recent efforts to engage its members, the transportation industry, and the general public in raising awareness in identifying instances of human trafficking and preventing it from taking place in communities across America,” noted TIA President & CEO Anne Reinke. “TAT is an organization that has shown a passion about and commitment to this issue for more than a decade, and we’re honored to be the latest industry partner to join in supporting the amazing programs and services TAT provides.”

TIA made the announcement of its partnership and donation during the Day 2 Opening Session of the TIA 2021 Capital Ideas Conference in front of an audience of more than 300 virtual attendees from across the 3PL and freight brokerage industry. TIA President & CEO Anne Reinke was joined by newly installed TIA Board Chair Michael Riccio, CTB, and TAT Executive Director & Co-Founder Kendis Paris, as they discussed how members of the transportation industry can come together in support of efforts to prevent human trafficking on America’s roadways.

“The transportation industry and, more specifically, truck drivers, play a critical role in combating human trafficking,” said Michael Riccio, CTB, Chief Marketing Officer of Leonard’s Express and TIA’s Incoming Board Chairman. “It is critical that we continue to educate, train, and engage with law enforcement and others in our industry to stop this horrible crime, and partnering with Kendis and Truckers Against Trafficking will help position TIA to do just that.”

TIA’s partnership with TAT comes on the heels of the Association formally signing the U.S. Department of Transportation’s Transportation Leaders Against Human Trafficking initiative during Day 1 of the conference.

With three core goals – to saturate trucking, bus, and energy industries with information and materials; to partner with law enforcement and government agencies to facilitate the investigation of human trafficking; and to marshal the resources of our partners to combat this crime – TAT has a proven track record of delivering on its mission. With more than 87% of every dollar donated going directly to their anti-human trafficking programs and services, TAT is an organization that is affecting change on a daily basis.

“Using their points of intersection, 3PLs play a critical role in helping to educate and activate their logistics partners to address the realities of human trafficking through TAT partnerships,” noted Kendis Paris, TAT Executive Director & Co-Founder. “TIA's support will specifically help bolster our Shipping Partners program, which last year alone, led to over 300 new carrier relationships for our organization. We applaud the Association's efforts in marshaling their resources in the fight to end human trafficking." 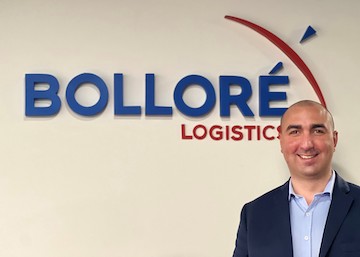 A new managing director for Bolloré Logistics Argentina and Uruguay